E3M2: Fire Temple is the second map in episode Hellish Extermination of ConC.E.R.Ned. It was designed by Matt Powell (cannonball) and uses the music track "Anchor," originally composed by Mark Klem for Memento Mori II. 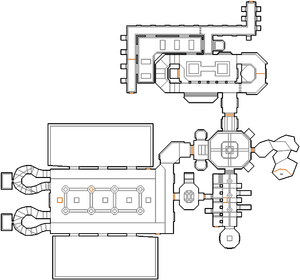 Map of Fire Temple
Letters in italics refer to marked spots on the map. Sector, thing, and linedef numbers in boldface are secrets which count toward the end-of-level tally.

Head forward to a shotgun (taking it will open two closets on your right containing shotgun guys) then continue on to a sealed door; if you go up the steps on your left and turn left you can walk past some imps to a skull switch that will open this door, along with two more closets containing spectres. Go through the north door to a blood fountain then continue north through a second door to a marble hall which has zombies and cacodemons in it; drop down to the floor below and head north through a doorway to a T-junction, turn right and follow the hallway to a gargoyle switch guarded by a spectre. Press the switch and dodge the lost souls that are released behind you, then go back to the T-junction and head west past some bars that have lowered until you get to a chaingun in front of a second switch - watch out for the walls on either side opening to reveal a pack of enemies as you approach it. After pressing the second switch, go back to the marble hall and climb up the red steps to the west side to get back to the upper level, kill any shotgun guys and lost souls that block your path then follow the ledge east to the red skull key; watch out for one or two barons of Hell that are released on your left as you round the corner.

Go back to the fountain room and dispose of one or two waiting cacodemons, then go through the west door (requiring the red key) to a second larger hall with some overhead imps and shotgun guys. At the back of the hall is a pillar holding the yellow key as well as two doorways - go through the left-hand doorway and climb the stairs to the shotgun guys' ledge and head forward until you reach a rocket launcher next to a lion switch that will remove the bars blocking the second doorway. Drop down to the floor and go through the north-west doorway, climbing up the steps to the imps' ledge before going to the opposite end to find a second lion switch that will lower the pillar with the yellow key. Taking the key will cause a wave of shotgun guys, demons and barons to teleport in.

With the yellow key, return to the fountain room and open the east exit door. Head round the corner to find a baron and two lost souls guarding a patch of sky, which you must step on to finish the level.