E3M2: Military Depot is the second map of The Evil Unleashed. It was designed by Thomas Möller, then known as Grindcrusher. 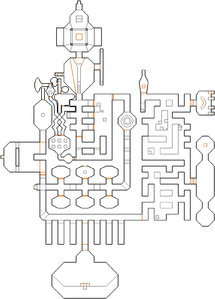 Map of Military Depot
Letters in italics refer to marked spots on the map. Sector numbers in boldface are secrets which count toward the end-of-level tally.

In order to reach the blue key, it is necessary to press a switch in the far south of the level. The switch is accessible by teleporting from the north-east of the level onto the platform in front of the switch. However, as the teleport destination thing (thing 153) is not present in easy skill, the teleporter does not work, and thus the only way to complete the level in easy skill is to enter the southern room directly and strafe-run across the teleport line at the front of the platform.