E3M2: Slough of Despair is the second map of Inferno in Doom. As can be seen from the map, its plan is based on a human hand. The name may be a reference to "the Slough of Despond", from John Bunyan's The Pilgrim's Progress. It was designed by Sandy Petersen and uses the music track "Donna to the Rescue." The par time is 0:45. 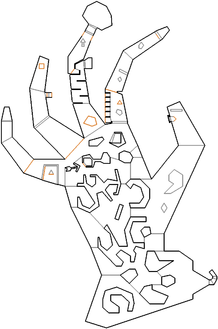 Map of Slough of Despair
Letters in italics refer to marked spots on the map. Sector, thing, and linedef numbers in boldface are secrets which count toward the end-of-level tally.

At the start, keep to the left hand wall and just keep firing at any monster and/or demon that comes your way. If you get outnumbered, simply backtrack to the start and let the monster(s) follow you. Begin firing at the monster(s) until you've defeated them. Keep moving along until you get to the blue key. Then turn around, go straight, and when you're out of the alcove, take two lefts into another one. Walk up to the wall in front of you. Kill the lost souls that were behind the wall (or avoid them), and go into the room they were in. Open the blue door in here, hit the switch, turn around, go right, grab the health and ammo, and get to the exit teleporter.

Two "hanging leg" decorations (Things 184 and 185) and a "pool of blood and flesh" decoration (Thing 187) have no flags set for any of the difficulty classes, so they do not actually appear in the level.

Near the second "joint" of the "little finger" (just after the cacodemon trap), a severed leg is hanging from the open sky.

Upon entering midway into the "index finger" the wall at the opening closes. This wall is supposed to be opened by the switch at the end, but the one time only switch may be triggered before the wall fully shuts. When this happens the player becomes trapped and is unable to complete the level.