E3M2: The Cesspool is the second level in The Dome of D'Sparil episode of Heretic. 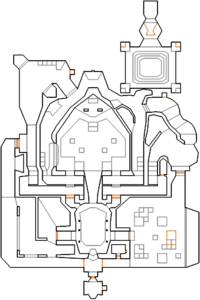 Map of The Cesspool
Letters in italics refer to marked spots on the map. Sector, thing, and linedef numbers in boldface are secrets which count toward the end-of-level tally.

You start inside a small azure brick room filled with columns. Just ahead lies two cages, left and right to your position, which contain an ophidian and some bonus respectively. Ignore them for now and go forth. Across the room you can see two yellow key doors nested at the corners that have fire gargoyles guarding them. Between them there is a tunnel out of the room. Take that and enter a small court-like area with water and four high pillars. You can see the yellow key ahead on an altar but you can not get it yet.

Clear the court from the sabreclaws and gargoyles if you wish and then climb up the stairs to the stone tiled floor. Enter any of the two openings located right and left of the tunnel that brought you here. Go down in the moss-themed water tunnels and fight your way to the center killing gargoyles. The left path there contains a Silver Shield and some ammo while the right one has the first Ethereal Crossbow found in the episode, the Wings of Wrath and a Tome of Power. When you have reached the center, press the switch. You have lowered the altar upon which the yellow key was placed.

Go and get it while being aware of the stalking sabreclaws and then head back to the yellow doors at the starting room. Choose the right one and follow the corridor you see to another set of water tunnels. Before you enter, it is the time to visit secret 1. Now go down the green stone-tiled tunnel and go up a set of stairs just across the green door. You may want to get the Hellstaff first (you can easily dispatch the weredragons with some careful use of the pods). After that, enter the teleporter to a square room with some disciples guarding the green key. Collect the goodies and the key and take care of the ophidians who ambush right after. Now exit the room using the teleporter right opposite the one who brought you here.

You should land on a flooded room with some caged ophidians. You are inside the left yellow door you left before. Make quick work of the monsters and collect any goodies and then go towards the outside area. You will see another green door here. Open it and enter a castle-like big corridor. As you go down the corridor, you will notice a small warehouse-like building to your left, containing some disciples. Enter it, clearing everything. You will see an Enchanted Shield behind some barrels to the other edge of the room but it is recommendable to get it at the end of the level. Instead, go inside the dirt tiled floor and get ready for secret number 2. After that, resume your path on the corridor, taking care of the ophidian who will try to ambush you opposite of the blue door. A passage has opened to the starting room. Open the wooden door just in front of that passage to a room with the Gauntlets of the Necromancer and a switch you should use. The blue door has been unbarred but you still need the blue key, though.

Now go forth into a square stone room with some wooden risings and more mobs to slaughter. You can see a door on the other end of the room and by opening, it you can notice that it was the first green door you encountered back in the green stone tunnels. Secret number 3 can also be accessed through this room. After you are done with your scavenging, take the blue key and take care of the ambushing disciples. Now go back to the blue door and open it to find an iron lich. After you kill it you are free to leave. Be sure that you have taken the Enchanted Shield by now. In addition, if you want to get the rest of the items you could not reach before, you can obtain them by using the Wings of Wrath.

E3M2 is the first level in the episode where a Firemace can be found. If it has appeared, you can have it at one of five different locations. In order of appearance, the places are:

If the weapon did not appear, the next chance to obtain it is on the following level.

Linedefs from 521 to 528 have their upper textures on the wrong side. The lines are located in the corner alcoves of the green key hall that is separated from the rest of the level. The bug can be detected by looking up, but only when viewed at an alcove or when approaching an alcove while hugging a wall.