E3M2: The City of Lost Children (Curse of D'Sparil)

E3M2: The City of Lost Children is the second map of Curse of D'Sparil. It was designed by Kristian Käll (Kristus) and uses the music track from Heretic's E3M2: The Cesspool. 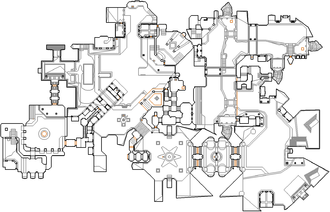 Map of The City of Lost Children
Letters in italics refer to marked spots on the map. Sector numbers in boldface are secrets which count toward the end-of-level tally.

Take the Ethereal Crossbow on your left then head east between the ruined wooden walls. After passing through the walls, turn left and climb a set of steps to a stone ledge guarded by fire gargoyles, then follow it round a corner to see two monsters guarding a switch – they will be golems, undead warriors or undead warrior ghosts depending on skill level. Press the switch - the first of six needed to reach the yellow key - then go back down the steps and head east into the water, watching out for the golems or sabreclaws teleporting in.

Head east across the water to another dock, watching out for nitrogolems and undead warriors firing at you from that direction. Step on to the dock then head north until you reach a door with yellow key markings, then turn round and climb some wooden steps to switch #2. After pressing it, drop back into the water and head north between two stone buildings, then turn right to see another set of steps guarded by sabreclaws. Climb the steps and kill any undead warriors which are guarding switch #3.

Drop back into the water and head south (watch out for more monsters that have teleported in to the water and the ledge on your right) until you pass the dock you climbed earlier, then turn right and follow the moss-covered wall on your right to a small wooden door. Open the door and kill the gargoyles waiting behind it, then climb the steps and turn left and left again to find switch #4 (guarded by five fire gargoyles on hard skill levels). Ignore the teleporter in this room and head south down and up two sets of steps, then turn right, left and right again to find two undead warriors guarding another door. Go through it then turn right and follow the ledge here to switch #5, killing any nitrogolems blocking the way.

Drop off the ledge and look west to see the yellow key on a pillar. Slay any approaching monsters that have teleported in, then go past the pillar and turn right, following the wooden path to a switch recessed into a stone wall. Press the switch to lower a lift (along with three fire gargoyles on hard skill levels), then ride this up to switch #6 which is guarded by several monsters. Press the switch above the lift to return to ground level to find yet more monsters teleporting in – deal with them, then return to the pillar holding the yellow key and press the switch next to it. This will lower a lift around the pillar, letting you reach the key.

Return to the start point and look south to see a door between two yellow key gizmos. Open it and destroy the waiting sabreclaws, then go through and open a second door to enter an area with a small fountain (watch out for an ambush by more sabreclaws on medium and hard skill levels). Approaching the fountain will alert several fire gargoyles and nitrogolems to your presence – use the low ceiling by the door as cover, then head south-west past the fountain and through a small tunnel.

As you exit the tunnel, watch out for sabreclaws ambushing you from either side as well as disciples of D'Sparil waiting on ledges above you. Turn right and head up the steps, then turn right again to go up a staircase protected by more sabreclaws. At the top, turn left and follow the yellow ledge to a small room containing the green key, which is protected by undead warriors.

Return to where you found switch #2 while looking for the yellow key. Next to the switch is a small door with a yellow key gizmo next to it – before entering, shoot any waiting monsters through the window next to the switch. Once the room is clear, go through the door and head down the steps on your left. Take the Enchanted Shield in the middle of the room, then take the blue key from an alcove in the north-east wall.

Head back to where you found the yellow key and go south-east down a set of steps, where you will find a large fountain in a six-pointed star. Pressing the switch by the fountain will lower the gates blocking the doors to the east, but it also opens two alcoves containing iron liches and causes a large number of other monsters to teleport in. Get the monsters to infight with each other, then head east through the wide doors next to the blue key gizmo.

Kill the disciples waiting in the next room, then press the switch in the middle of the room to lower another set of gates. Go east through the doors either side of the green key gizmo to find several undead warriors waiting for you, then head north between the buildings (which are protected by fire gargoyles) and turn left to see a bridge. Do not cross the bridge immediately – sabreclaws and undead warriors are waiting on the other side, and more sabreclaws will teleport in behind you when you cross the river to trap you. Let the monsters in front of you approach before dispatching them.

Once the way is clear, cross the bridge and turn right to kill any nitrogolems waiting ahead. Go to the area they were guarding to find a second bridge, cross it and kill the undead warriors waiting on the other side. Head forward and watch out for fire gargoyles approaching from the right, as well as (depending on skill level) two disciples, two ophidians or an iron lich. Once the way is clear, head south up the stairs to the exit door and press the switch behind it to finish the level.

As soon as the level starts, turn round to find a Morph Ovum behind you, among some barrels.

When following the ledge to switch #1 you will see a doorway on your left. Through it is a Silver Shield, guarded by three golem ghosts on medium or hard skill levels.

From the pillar holding the yellow key, head north-east up a set of steps to find a Dragon Claw and ammo. Watch out for the crushing ceiling that activates when you approach the weapon.

A Chaos Device can be found in the water next to the lift leading to switch #6, and a Bag of Holding can be found between two stone columns just to the south-west. Near this artifact is a door requiring the yellow key – behind it is a Silver Shield, and the staircase here leads to more items including Quartz Flasks, Timebombs of the Ancients and Crystal Geodes (this also provides an alternate route to the green key).

After climbing the staircase to reach secret #5 below, you will encounter one or more ophidians. Kill them then climb to the ledge they were guarding to find an Enchanted Shield, which is guarded by one undead warrior on medium skill level or two on hard.

Before crossing the bridge to the exit door, head west up a set of steps to a room containing golems or nitrogolems. Turn right to enter a neighboring room with a Morph Ovum and three Crystal Geodes.

* The vertex count without the effect of node building is 7157.