E3M2: The Dead Marshes is the second map in the Shadowlands episode of Masters of Chaos. It was designed by Doom_Warrior and uses the Hexen music track "Grove". 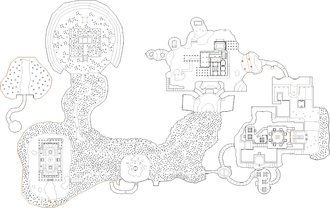 Map of The Dead Marshes
Letters in italics refer to marked spots on the map. Sector, thing, and linedef numbers in boldface are secrets which count toward the end-of-level tally.

Pods are prevalent throughout this level; blow them up to help you kill enemies and save ammo.

Follow the sludge tunnel to a large open area with a central tree trunk. Watch out for the golem and nitrogolem ghosts that rise from the ground and press the switch on the south side of the tree, which will lower a set of bars to the west. Take the Firemace north of the tree then go through the bars you just opened, following the path through the tree trunks until you reach a stone building surrounded by sludge.

Take the Dragon Claw near the entrance to this area, then go inside the building to find that it has four wooden staircases going north and south. Go up either of the south staircases and press the switch in the middle of the wall; this will open another set of bars in the central area, but also seals the entrance to this area. Golems, undead warriors and an iron lich will also teleport into the area.

Leave the building and go round to its north side to find a green staircase - climb it to the top (collecting an Ethereal Crossbow on the way) then head west along the walkway to find a Bag of Holding. Head around the corner to find a teleporter leading back to the central area.

Back in the central area with the tree trunk, go through the north-east opening which is now accessible and follow the path behind it until you reach an open gate. Slay the sabreclaws in this area, then go north-east into a tunnel and press the switch next to the bars to open them. Keep heading north-east past an island with a sign until you enter a covered area guarded by nitrogolems and fire gargoyles.

As you approach the nitrogolems, a wall behind them will open to reveal a number of sabreclaws. Destroy these monsters then follow the passage behind the wall and press the switch on the north wall - this will build a staircase later in the level that will allow you to reach the blue key. Leave the passage and head west towards the large wooden building in this area.

Go round to the north-west side of the building to find a walkway through the sludge leading to a door. Go through this door to a hall with chandeliers - as you enter, two alcoves containing fire gargoyles will open in front of you. Once they are dead, head up the staircase in the north-east corner (which you raised using the earlier switch) to reach a red-floored room. The blue key can be found here, guarded by undead warriors.

Backtrack to the starting area and press the switch on the north side of the tree trunk, between the blue key gizmos. This will open the trunk to reveal some sabreclaws guarding another switch - take the Energy Orb next to the switch and press it, which will open the bars blocking the east opening in the fence. Go through this opening and follow the path to a round cavern, watching out for four weredragons that rise from the floor in front of you.

Go south-east and follow the steps to a room with cross-shaped drains, populated by nitrogolems and gargoyles - more enemies will also rise from the floor as you enter. Go east up another staircase to find a switch guarded by two more gargoyles and press it, then backtrack to the round cavern. Watch out for the weredragons, golem and undead warrior that have been released into the drain room on the way back.

Back in the round cavern, go up the north staircase and through the now-open door at the end to get outside and see a large building in front of you. Turn left and follow the path round the building until you reach a pool of sludge, then turn left and head for the triangle-stone wall in front of you. When you reach the wall, turn left again and follow the path until you reach a switch, which will lower a lift next to it when pressed.

Ride the lift up to get on top of the stone wall, and follow it all the way to the end to find another switch. Press this switch then turn around and drop off the wall to the sludge below - in front of you are two curved brick walls, and pressing the switch has lowered a section of wall between them. Go through this wall to find the yellow key behind it.

Take the yellow key then turn round and approach the triangle-stone wall in front of you - inside the U-shaped section is a teleporter that will put you on top of the wall. Go forward to drop off the wall, then head towards the large building in front of you and make your way round to its east side. Watch out for the ophidians, undead warrior and shadow beast that have teleported into this area. Once you reach the east side of the building, face west and climb the steps to a wide door requiring the yellow key. A Bormereth is waiting behind the door - use the pillars in the room to give you cover from its attacks.

When the Bormereth is dead, four walls will lower in the corners of the room to release undead warriors, gargoyles, disciples of D'Sparil and sabreclaws into the area. Dispose of them then go through the north-west wall and follow the staircase behind it; you will reach a room that has three square structures with round openings. Go to the north-west structure and look at its west face to find a switch - pressing this switch opens the route to the level exit, but also releases a number of dark bishops into the room. Kill them then go to the south-east structure in this room where a teleporter has been revealed - step into it to return to the starting area.

Go through the north-west opening in the fence, then follow the path to an open area with a raised central graveyard. Go to the west side of the graveyard then look west to see a switch between two moss-covered walls - press it, then return to the south side of the graveyard and climb the steps which have now risen. Head forward to a ruined building and open the silver door, then go through the doorway on your left to a room with barrels. Take the two Claw Orbs here and press the switch in the south-west corner.

Leave the ruin, slay the reivers which have appeared outside and go to the east side of the graveyard to find another switch between two mossy walls. Press it, then go round to the north side of the graveyard to find a large teleporter which will send you to an enclosed area. Turn round and follow the low passage past some sabreclaws until you get outside, then follow the sludge river into the horizon to finish the level.

A walkway runs round the south side of the blue key building, which has a Hellstaff on it.

* The vertex count without the effect of node building is 40019.