E3M3: Cargo Shaft is the third map in the Shadowlands episode of Masters of Chaos. It was designed by Caleb26 and Doom_Warrior, and uses the Hexen music track "Secret Chapel". 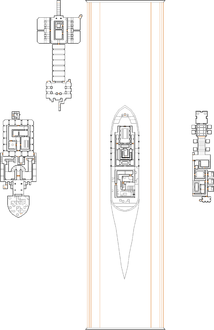 Map of Cargo Shaft
Letters in italics refer to marked spots on the map. Sector, thing, and linedef numbers in boldface are secrets which count toward the end-of-level tally.

You begin at the stern of a ship. Turn right and head around the corner to find a crate with a Silver Shield on it; jump on the neighboring barrels to reach the item, then go through the door in the east wall and turn left. Climb the stairs ahead and turn right, kill the gargoyle ahead and go through the door it was guarding. In the next room, open the door in the south-west corner then kill the undead warrior at the top of the stairs and press the switch it was guarding.

Head back to the door you used to get inside the ship and go south, going round the corner to find an Ethereal Crossbow among the crates. Go east through the open door, then turn left and left again to climb the steps which raised when you pressed the switch. At the top, turn round and head forward to step on some crates, then turn left and head forward to drop to another part of the ship.

Head forward until you reach the bow of the ship, then climb the steps and press the switch behind the fire braziers. Retrace your steps back towards the stern until you see an opening in the wall on your right, and enter it to find that a door in the north wall has opened. Destroy the golem waiting behind the door and head left or right down either passage. Destroy another golem ahead and turn right or left to enter a small area with a chandelier. There are two staircases in the south wall - go down the east staircase to reach the lower deck.

At the bottom of the staircase, watch out for two butchers approaching from either side then go through the doors at the east or west ends of the passage. Go down the stairs and follow the passage until you reach a room with four metal pillars - take the Jade Wand in the middle of the room and use it to slay the weredragons that are released from either side, then go south through either doorway to a storeroom.

Looking out for sabreclaws, make your way to the southern tip of the room and press a switch hidden on a crate which is guarded by an undead warrior. Press it, then backtrack to the staircase (watch out for disciples of D'Sparil that are released from alcoves on the way) and return to the main deck. When you reach the top of the stairs, go through the door just on your left which has opened and take the Skull Staff from the table. Press the switch in the north wall, and an alcove will open behind you to release an invisible warrior - this monster attacks with highly damaging invisible projectiles and dodges erratically, so try to fight them in confined spaces when you encounter them. Once the warrior is dead, leave the room and go up the west staircase to climb to the first floor of the ship.

At the top of the stairs, turn left to kill two knight archers then head north up the wide hallway and kill more archers ahead, as well as a Bormereth through the stone door that opened when you pressed the earlier switch. Approaching the stone door at the end of the passage will open chambers on either side and release sabreclaws - you may wish to provoke infighting to clear the monsters out more easily.

Pressing the switch opens a door nearby. Leave this room through the north door (a butcher may be lurking nearby) then turn left and go through the door on your right. Go straight forward through the door you just opened before it shuts, and take the staircase behind it down to the cargo hold.

At the bottom of the stairs, open the door and turn right to kill a butcher. Head forward and go through the door in the south wall to reach a hall filled with barrels and roaches. Head to the south end of the hall and press both switches here - the east switch will open the neighboring door and reveal a number of green chaos serpents. Go into the serpents' room and head through the south door, then turn right and head around the corner to find a switch - press it to open a door in the lower deck. Backtrack to the door leading to the staircase back up to the lower deck (watching out for sabreclaws that have been released into the area) but do not go up it; instead, take the Dragon Claw by the north wall then follow the passage to a teleporter.

The teleporter will put you by the staircase leading to the main deck. Return to the area where you found the Jade Wand and go through a stone door to the north, behind which you will find two sets of steps. Head down the right-hand set to a metal chamber and kill the enemies here, then go north past a crushing ceiling. Press the switch in the alcove to the right, then turn round and kill a butcher which is revealed; once it is dead, press another switch behind it. Go back to the stone door and take the left-hand set of steps this time - kill the enemies here, including two or three disciples that were revealed when you pressed the earlier switch, then go into their chamber and follow the narrow passage to the green key. Be careful when you take it - sabreclaws will be released either side of you, and an ophidian will be revealed behind you.

With the green key, take the staircases to the first floor (where you fought the Bormereth). This time, when you reach the top of the stairs turn left and head straight forward to a door with a green key gizmo. Go through it and head straight forward down the corridor to a room with a red floor. Kill the archers, nitrogolem and ophidians in this room then leave using the north-east door. Turn right and kill the butcher ahead, then go through the door it was protecting to enter a library. Kill one or more undead warriors, then open the bookcase in the south-west corner to find an undead warrior ghost protecting a switch. Press it and leave the library, then turn left and go through the now-open door on the right-hand wall. Press the switch in this area, which will reveal the level exit.

Backtrack to the main deck of the ship and head to its bow where nitrogolems, archers and an iron lich have teleported in. Kill them and press the switch that has appeared between the braziers to finish the level.

Before taking the staircases to the lower deck and first floor, go through the small door to the north-west to find a Bag of Holding.

After going down the staircase to the lower deck, go through the door in front of you and then the door on your left. There is a Tome of Power in this room being guarded by a nightmare.

After going through the door at the south end of the cargo hold, turn left and follow the path round to some Mace Spheres. Press the switch next to them to reveal a Firemace.

* The vertex count without the effect of node building is 2448.