E3M3: Cloister is the third map of episode 3 of Heretic Treasure Chest. It was designed by Dreadopp and uses the music track "Mole" from Heretic, created by Kevin Schilder. 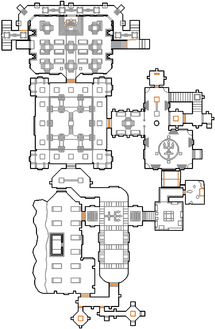 Map of Cloister
Letters in italics refer to marked spots on the map. Sector, thing, and linedef numbers in boldface are secrets which count toward the end-of-level tally.

Take the Ethereal Crossbow in front of you then go through the north door to enter a chapel with sabreclaws and disciples of D'Sparil - the yellow key is sitting on an altar at the north end of the chapel, along with a Dragon Claw. Take the Silver Shield behind the door, head east up a staircase then follow the passage west past some nitrogolems until you reach a switch, destroy the disciples that are revealed either side of it then press the switch and go back down to the chapel. Look behind the altar to find that a pair of steps have risen, allowing you to climb on top of it to reach the yellow key; watch out for fire gargoyles, sabreclaws and nitrogolems that teleport in by the chapel entrance when you take the key.

Return to the starting area and head through the east door, slay the undead warriors ahead then head north towards the exit door (which requires the green key). Step on the gray pad in front of the exit door to open a second door on your right and reveal a staircase with sabreclaws, go up the stairs to another door and open it to find an iron lich in front of Gauntlets of the Necromancer. Step on the gray pad under the lich, kill the undead warriors that are released behind you then return to the starting area and go through the now-open south door to confront two disciples, as well as another lich on thou art a smite-meister and black plague possesses thee skill levels. Follow the passage east to a crossroads with a red trident on the ceiling then head south towards a lich in front of a silver door, which leads to a chamber with three more doors. Go through the door nearest to you to find a disciple on top of a gray pad which you need to stand on; kill the undead warriors that are released around you then return to the chamber and head through the north door to reach a graveyard with weredragons and undead warrior ghosts. Enter the tomb in the middle of the graveyard to find the blue key.

Leave the tomb and return to the chamber with three doors, then go through the south-west door (next to the blue key gizmo) to find two fire gargoyles and a nitrogolem ghost guarding another gray pad. Step on the pad then return to the crossroads under the red trident and go through the now-open east door to find a storeroom with a few monsters. Head north into a short passage to find two undead warrior ghosts guarding a door, which leads to a small chamber with disciples guarding a Silver Shield and the green key. Take the key and go back to the storeroom to confront some sabreclaws and fire gargoyles that are teleporting in (along with undead warriors on bringest them oneth skill level or higher), then go back to the starting point and go through the yellow key door again to return to the exit door. Open it, kill a waiting disciple then press the blue switch in front of you to finish the level.

Because secret #1 is unreachable, it is impossible to get 100% secrets or items in this level.

Although player starts are provided for cooperative play, it is impossible to finish the level in this mode as all things (including keys) are removed except for three Ethereal Crossbows.

* The vertex count without the effect of node building is 3584.