E3M3: Malebolge is the third map of Inferno in Doom the Way id Did. It was designed by Icytux in the style of Sandy Petersen. The par time defined in the DEHACKED lump is 1:15. 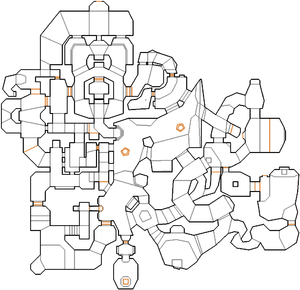 Map of Malebolge
Letters in italics refer to marked spots on the map. Sector, thing, and linedef numbers in boldface are secrets which count toward the end-of-level tally.

Open the door at the start and you will be greeted by a cacodemon. Go behind him to get a shotgun and some shells. Go to the other side of the area as the doors need the red key to find a baron of Hell and a chaingun, as well as a blood tunnel leading to a very open area. You can go through the vines here. Head south and find some stairs leading up to the higher ground so you can acquire the red skull key. Now go northward, and then through the north door, up the staircase and through the red door to go back to the beginning. A few more monsters may appear here, so kill them and take the other red door in this room. In the next room, do not take the door in front yet. A cacodemon can ambush you from the vines. Follow the passage through the vines, taking the next door you see and grabbing the blue key at the end. Now you can either backtrack through the passage and take the other door past the red door, until you find the next blue door, or drop down from where the key was and take the blue door there. Either way, find the stairs and take them up, and hit the next switch (there is a surprise cacodemon behind you) to obtain the yellow key. Drop down here looking out for the baron of Hell here and find the yellow door to exit.

When you reach the blood river that encompasses most of the map, head eastward to find a rocket launcher.

Head south from the blood river and you will eventually find the plasma gun in the southernmost part of the map.