E3M3: Pandemonium is the third map of Inferno in Doom. It was designed by Tom Hall and Sandy Petersen. It uses the music "Deep Into The Code". Pandæmonium is the name of the capital of Hell and the palace of Satan in John Milton's epic poem Paradise Lost.[1] The par time is 1:30. 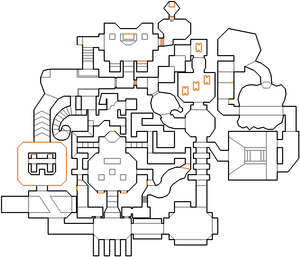 You start in the center of the most southern area. Walk straight up the stairs to enter a wooden area with a switch in the end and two stairs on the sides (close to the switch). The switch lowers the pedestal in this area with a shotgun on top. Take the right stairs (east) and enter a red bloody roof. Turn right and walk forward. Take right again once you will be lowered on an elevator and enter a spacier and pinker corridor.

Walk forward. To your right you can see another elevator, but choose to go down the metallic stairs and you will find the blue key. Go back the same way you came back to the start or use the aforementioned elevator as a shortcut with items at the top. Be careful since the floor hurts.

This time take the western road and pass a room with green toxic and a room with moving walls. Go up the stairs in the next room and pass it and to a wooden door far away. To the left of the door (looking at it), there is an area with the blue door to the right. Inside is the exit.

Two energy cells (Things 19 and 20) have no flags set for any of the difficulty classes, so they do not actually appear in the level.

There are 26 uncategorized anomalies in this level's REJECT table.

In Doom v1.1, flipping the switch inside the sunken floor also raises the floor. If you then flip the switch to the south, the floor will then try to move up into and through the ceiling. Later versions of Doom fix this bug.

Early versions of this level appeared as E1M9 of Doom 0.4 and E1M5 of Doom 0.5. The map was originally conceived as the Control Center of the Tei Tenga base mentioned in the Doom Bible. The map was meant to connect both the "public" and "restricted" sides of the base, serving as a central hub of sorts, having many exits to different maps.