E3M3: R You Lonesome? is the third level of Serenity. It was designed by Bjorn Hermans and Holger Nathrath, and includes a custom music track. 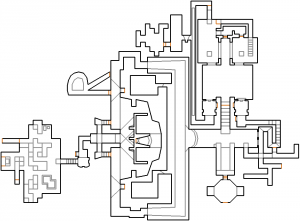 Map of R You Lonesome?
Letters in italics refer to marked spots on the map. Sector numbers in boldface are secrets which count toward the end-of-level tally.

* The vertex count without the effect of node building is 789.

The optional, custom music for this level is a remix of "Axel F," the title theme of the 1984 film Beverly Hills Cop.