E3M3: Subterranean Stoneworks is the third level of Hell's Gate - The Red Spot of Jupiter, the third episode of The Lost Episodes of Doom. It was designed by Bob Carter and takes a little inspiration from Containment Area to its starting place. 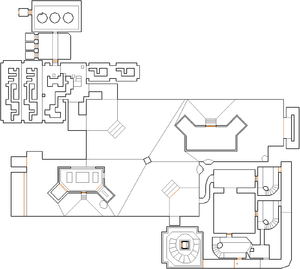 Map of Subterranean Stoneworks
Letters in italics refer to marked spots on the map. Sector numbers in boldface are secrets which count toward the end-of-level tally.

Like in the previous level you need to unlock the exit switch. You begin in an area similar to that in E2M2. Take nearby shotgun and a chaingun on the upper crate. The eastern side of the maze has nothing but imps and cacodemons to kill. The western side has a supercharge, two blur spheres and a security armor.

If you want exit follow the steps in the next paragraph.

Enter the north door in the crate area. Cross the lava room's bridge into another room. One of the three columns has the switch behind. Unlit it, and the exit will be unlocked. If you wish you may enter the door and flip another switch. It opens the doors in the lava room. This also reminds of the rocket launcher room in E2M2 but aside from rocket launcher you can find a megaarmor and a plasma rifle in these rooms. Note: monsters can sometimes close the doors when they are open. In this case return to the three columns room and flip the switch behind the door again.

Now, since you have unlocked the exit, you have just a straightforward path to the exit. Go back to the crate room and enter one of the green corridors in the south east. Descend into a large brick hall and cross it until the south eastern staircase. Destroy the barrels blocking the way into the silver corridor (and beware of an ambush in the wall). Follow the corridor to the two white rooms. Head to the right and enter the door in the south. In the marble area, ascend the stairs and enter the skull door. Now, you can see two barrels in the exit sign. Push the marble wall to lower it and go to the revealed area. The stairs will lead you to the exit door with the switch available.

The brick hall (the center of the level) has two subrooms in the structures. The south western one reminds of a computer terminal room and has an invisibility sphere, a soulsphere and a combat armor. To get the two lattermost items open to the southwest wall and destroy imps behind. The north eastern building room is closer to a hellish theme featuring tougher enemies. It also has three rocket boxes, a potion, a shotgun and ammo, another combat armor and red skull key (that you do not need at all on this level).

This level has no official secrets resulting in 0% of secrets in the intermission screen.

A former human is placed inside crates in the crate area making it impossible to get 100% kills on the level.