E3M3: The Confluence is the third level in The Dome of D'Sparil episode of Heretic. 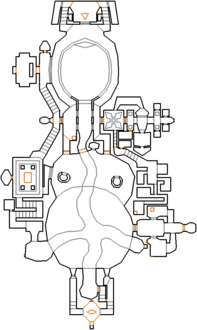 Map of The Confluence
Letters in italics refer to marked spots on the map. Sector, thing, and linedef numbers in boldface are secrets which count toward the end-of-level tally.

At the beginning, you are situated on a small pond up on a cliff with a waterfall. Before you fall down to the area below, you go for secret 1. The waterfall will drop you down to a big outdoor area with two other waterfalls left and right forming a pool and a big natural hangar right ahead of you. In between the waterfall you just dropped from, there are two doors you will visit much later, near the end of the level. Near the right waterfall, you can see the yellow door and below the hangar, where the river ends, you can see the yellow key resting in front of a watergate between two green key doors. As soon as you drop down, you will enrage a lot of creatures, an iron lich amongst them, and several more will shoot you from above the other waterfalls or the iron watergate. The best you can do here is to avoid them, rush for the yellow key, unleashing two more ophidians from the columns supporting the hangar, and then just run in circles to trigger a gigantic infighting. If you do it right, you will either have to face a very weakened iron lich or a single ophidian.

When you are finished with the monsters, go to the yellow door and open it to reveal a small temple, nested inside the mountain. Obliterate the sabreclaws and ophidians inside and go for secret number 2. Now visit the right room of the temple (as you were facing when you entered) and press the two switches. A teleporter has been opened at the left room. Take it to find yourself up to one of the two other waterfalls with the green key and a Ring of Invincibility. You may want to kill the ophidian atop the other waterfall with the Elven Wand from here.

After you have gotten the green key, drop back down on the outside area and go open the right green key door. You will enter a light brownish textured stone corridor. You can see the river following you on your left and just a bit in front of you, there is a wooden door to your right. Open it, dispatching the disciples and enter a small dungeon-like area. First, take the path to your left to take care of some hidden disciples who could cause you some trouble afterwards. Then return to the beginning of the area and open the wooden door in front of you. You will see a corridor with small circle areas on the sides. It is the time for secret 3. After that, continue walking down the corridor, picking the Dragon Claw on your right if you want and heading towards the switch. Get ready for the obvious ambush and press the switch.

When you have cleared the sabreclaws, go back to the start of this dungeon and take the right path you have ignored till now, to get to an area below with many barrels and golems. Secret 4 is here. There are two small rooms right and left of you, containing a Chaos Device and a Morph Ovum respectively. The path on the center will take you to a small corridor infested with golems. If you are playing on one of the three easiest skill levels, turn right for a Silver Shield. If you are not, just follow the corridor to a room with a teleporter. The teleporter will bring you to the small temple inside the yellow key door.

Come back where you were before you entered the mini-dungeon and continue down the corridor to a big oval room with two stairways up ahead. You can see the river ending on a small locked pool with ophidians but they cannot shoot you yet due to height differences. Go to where the stairways end up, fighting the sabreclaws and then grab the blue key. As soon as you take it, you will trigger a weredragon ambush. Due to the narrow space, you may consider using a ring or at least a Tome of Power to take care of them. After it, take the other path of the oval room and enter the blue door.

Go right at first and find the room with the three undead warriors. Teach them a thing or two and then go for secret 5. Now press the three switches. Beware as the ophidians in the oval pool room have been unleashed. Also a passage has opened to your right. Go inside and get "trapped" by the disciples. Take the Enchanted Shield and hit the switch to open the way outside. The lights will lower when you do that to provide you with a romantic atmosphere.

Next, go back at the oval pool room and take care of the ophidians. Now that you can climb inside the pool, take the Tome of Power and follow the river to the other side of the watergate for a Phoenix Rod. Go back inside the blue door and take the now open path to the left to a room with a crusher. Obliterate the golems and access secret number 6. Now go across the room to some stairs leading up and find yourself atop the third waterfall. Do not forget secret 7 on your way. Press the switch on the third waterfall's pond opening the two doors beneath the starting waterfall and then fall down. Secret 8 has opened by now. Go inside either of the two opened doors and into an azure brick room. Take out the iron lich there. Then step up on the altar to open the way to the exit (and an unfortunate disciple.) Before you finish the level, be sure to get secret 9.

If the Firemace has appeared, you can find it in one of six different locations. In order of appearance, they are:

If the weapon did not appear, the next chance to get it is either on E3M9 or E3M6.