E3M3: The Order's Chaos is the third map of Curse of D'Sparil. It was designed by Kristian Käll (Kristus) and uses the music track from Heretic's E1M4: The Guard Tower. 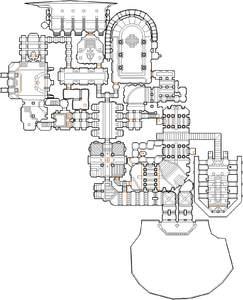 Map of The Order's Chaos
Letters in italics refer to marked spots on the map. Sector numbers in boldface are secrets which count toward the end-of-level tally.

As you step off the teleporter pad four undead warriors will teleport in around you, which will be ghosts on medium and hard skill levels. Grab the weapons and items around the room, then drop into the south-east corner (guarded by ophidians on medium and hard) and head through the stone door to a short passage. Turn left to see a wooden door ahead; open it but step back as undead warriors are waiting behind the door, plus eight sabreclaws on hard. Deal with these monsters, then go through the door to a hall with a light-blue floor. More sabreclaws, undead warriors and gargoyles are waiting ahead - use the columns in this area as cover.

Follow the hall east and north until you find a Bag of Holding in front of a trench, then drop into the trench and a fast-flowing river will carry you to a hall filled with water. Watching out for fire gargoyles, head around the central structure to find an Enchanted Shield then look at the south wall to see a switch. Pressing the switch opens the surrounding walls and allows a number of sabreclaws to enter the area, joined by nitrogolems on easy skill levels, undead warriors on medium or disciples of D'Sparil on hard. Go through any of the wall openings and follow the passage north until you reach a dead end; from here, go left or right into another wall opening then look north to see a teleporter back to the light-blue hall.

Ahead of you, a silver door has opened in the south-east corner of the hall releasing several monsters. Go through the door and head south through a pair of archway to an outdoor area, then turn right and right again to see a number of fire gargoyles through another pair of archways. Go through the archways and turn left to see a hallway with four sets of crushing ceilings ahead - use the crushers to damage or kill the approaching monsters, then time your run through the crushers to reach an area guarded by six nitrogolems, undead warriors or disciples. Press the switch inside the patterned pillar and take the Timebombs of the Ancients, then go north through an open door to return to the starting room.

A switch has been revealed in the south-west corner; press it to open the north door, then go through this to a hall with a red floor which is guarded by fire gargoyles, plus undead warriors on medium or hard. Take the Enchanted Shield in the middle of the hall then head north up the stairs, turning left at the junction to reach a room with four doorways. Destroy the sabreclaws to the left and right then go through the south-west door to enter a small room with a dark red floor. Press the switch in the south-east corner to lower the wall and reveal a second chamber which contains ophidians on medium and hard skill levels. Press the switch by the south wall which will lower a teleporter next to you - step into it to be transported to a water pool with more ophidians, along with disciples to the east and fire gargoyles to the north-west. Push past the ophidians to the stepped structure at the north end of the pool and collect the blue key sitting on the top step.

Fight or avoid the enemies around you then head for the door in the south-east corner of the room. Go through the door and destroy the sabreclaws waiting behind it, then turn right and right again to move between the columns to an area with a yellow floor, which is guarded by sabreclaws and nitrogolems plus two disciples on hard skill levels. Head south to another chamber with four red floors and approach the switch here but do not press it immediately, as four sabreclaws or undead warriors will teleport in around you. Once they are dead, press the switch to open the stained-glass windows to the west.

Go through the windows to return to the hall north of the starting room - destroy the approaching sabreclaws (along with nitrogolem ghosts on hard skill level) then head west through another set of stained-glass windows which have also opened. Press use on either of the metal walls at the west end of the chamber behind them to lower two lifts with disciples on easy or medium, or iron liches on hard. Ride the lift up to a green room (another iron lich is waiting here on medium or hard) then step into the teleporter in the north-west corner.

You will be sent to a curved hallway adjoining the room that held the blue key. Kill any waiting disciples and take the Silver Shield here if needed, then follow the hallway past a number of fire gargoyles until you reach another teleporter. Step into it to be sent to a large hall with water, then go straight forward to pick up the green key.

Taking the green key will cause two teleporter pads to lower ahead of you, releasing eight monsters into the area. Drop to the floor below and turn right, destroy the sabreclaws then head north through a doorway between two yellow key gizmos to find the yellow key waiting behind it. Drop to the floor below and collect the Silver Shield if you need it, as a number of monsters will teleport in around you. Once they are destroyed, go through the doorway in the north-east corner and follow the staircase to a door, which will return you to the room with four doorways.

Go through the north-east door to enter a chamber with a trident symbol on the floor, which is guarded by four undead warriors, plus disciples and fire gargoyles on medium and hard skill levels. Take the Morph Ovum then climb the steps and open the three stone doors in the north wall to get outside. There are undead warriors on your right and sabreclaws on your left, plus an iron lich on hard - deal with these monsters if you wish, then head west to the exit door and press the blue switch behind it to finish the level.

As soon as you enter the hall with the light-blue floor, turn left to see a stone door in the north-west corner. Go through it and turn right to see a wooden passage guarded by gargoyles. Towards the end of this passage is a ledge holding Gauntlets of the Necromancer, and by this ledge is a teleporter which will send you to another ledge on the other side of the hall. Here you can find one or two Quivers of Ethereal Arrows, one or two Energy Orbs and a Chaos Device.

After riding either of the lifts north-west of the starting room, you will enter a green room with a teleporter. Go through the north doorway and turn right to see a staircase guarded by two weredragons - a map scroll can be found above the staircase.

In the large room with the green key, climb the west steps to find a Tome of Power. When you approach the steps, two alcoves will open containing iron liches and disciples.

* The vertex count without the effect of node building is 6264.