E3M3: The Pit is the third map of Army of Darkness TC. It appears as MAP03 in the PWAD's Doom II conversion. It was designed by Andrew Stine (Linguica) and Stefan Maes, and uses the music track ? by Rick Sparks (Suture). 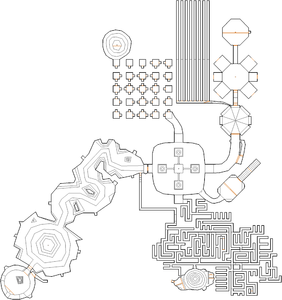 100% items is not achievable on this map as there is a health bonus (thing 598) stuck inside a wall in the maze.

* The vertex count without the effect of node building is 1927.