E3M3 is the third map of the third episode of Heroes. It was originally designed by Guy Stockie as 11FORTKO.WAD (Fort Knocks), then slightly modified by Albert Dewey for the compilation. It uses the music track " ". 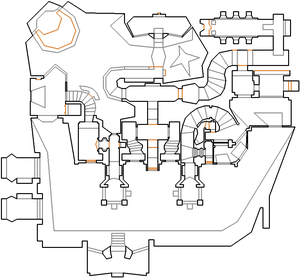 Map of E3M3
Letters in italics refer to marked spots on the map. Sector numbers in boldface are secrets which count toward the end-of-level tally.

A multiplayer-only box of rockets (Thing 403) behind the player starts has no flags set for any of the three difficulty classes, so it does not actually appear in the level.