E3M4: All the Marbles (Serenity)

E3M4: All the Marbles is the fourth level of Serenity. It was designed by Bjorn Hermans and Holger Nathrath, and includes a custom music track. 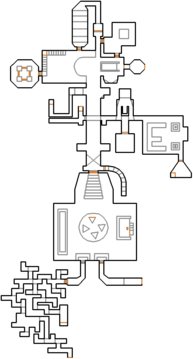 Map of All the Marbles
Letters in italics refer to marked spots on the map. Sector numbers in boldface are secrets which count toward the end-of-level tally.

Take all needed items and enter any door. Go south along the corridor with cage and use the western alcove. Use the teleporter at the end of it. In the outside area which is behind the cage, use the staircase leading to the door. Press use on any computer panel to get inside (note that pressing will open the opposite panel). Once done with that, bump against the eastern panel to unlock the red skull key (you might want to bump against other walls to unlock various optional items).

With the key, leave the computer room and in the outside area, go through the red door. Some crushers and platforms will work in this room. Get to the opposite side and then around the corner. Open the baron door. In the familiar corridor, head very south and drop down to the pit. Along the corridor, head into the eastern room. You can notice two pillars and some barrels there. Press the switch in that room. Backtrack to the place when you have dropped. You should now notice an open alcove. Enter it and press the skull switch to your right. Now, backtrack to the eastern alcove towards the eastern room to reveal an "E" letter with the yellow key on it. Grab the key and escape via the southern room. Enter the fiery teleporter.

Walk upstairs and open the brightest wall at the end. Open the red door. To your left is the structure which has the staircase behind it. Use that stairs and flip the switch to open one of the doors. Head thru that open door and open the yellow door. In this maze you should get to the south of it and press the switch which opens the second door in the previous area. To do this, head all the way west, south, east, south, east and then south. Press the eye switch in the dead end. Backtrack through the maze towards the room with two doors via the yellow door. Enter the opened east door. In the similar corridor, enter the fake wall at the end and flip the switch to beat this level.

Engine versions prior to v1.666 can display a minor HOM as the red door is opened.

Four of the secrets are unreachable; as a result, only 69% Secrets is possible.

An early version of this map appeared as E2M2 of the collection "Nathrath's Fab Four" (NATHRATH.WAD).[1]