E3M4: Discipline is the fourth map of episode 3 of Heretic Treasure Chest. It was designed by Magicsofa and uses the music track "Elf" from Heretic, created by Kevin Schilder. 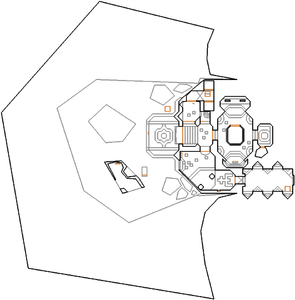 Map of Discipline
Letters in italics refer to marked spots on the map. Sector, thing, and linedef numbers in boldface are secrets which count toward the end-of-level tally.

Open the door in front of you to confront two nitrogolems and a gargoyle then head round to the south side of the room to find a switch, which will open two silver doors on the west and east sides. Go through the east door first to collect an Ethereal Crossbow and ammo, then destroy the undead warriors and sabreclaws that have come through the west door and go through it to find a staircase. Go down the stairs to destroy some nitrogolems then step round the green pillar (which has the green key on top of it) to find a switch that will lower a wall at the top of the stairs; kill any undead warriors and gargoyles that have been released behind you then go up the stairs and through the south doorway to find some nitrogolems and sabreclaws. Press another switch in the north-west corner to lower a lift behind you, which you can ride down to a chamber with a blue trident on the floor.

Enter the next room to find two undead warriors (joined by one or two ghosts on bringest them oneth skill level or higher) then step on the teleporter behind them to reach a grassy area on the west side of the level. Head south past the green block in front of you to find a second, taller block which you can step inside to find a switch, which will lower the pillar holding the green key. After pressing the switch, go round to the east side of the structure to find a grave and press the tombstone, then head north and east to find a teleporter that will return you to the green hall. Head back to the chamber with the blue trident and press the newly-revealed switch on the south wall to lower the lift again, then ride it up and go down the stairs to collect the green key, watching out for any monsters that have teleported in.

With the green key, go back up the stairs; just before you reach the top, go through the opening in the north wall and open the door in front of you to reveal two undead warrior ghosts. Push past them to the exit teleporter, which will send you to E3M5: Mountain of Fire.

From secret #3, you can step on the north side of the exit teleporter. This will send you to the secret level, E3M9: Man On The Edge.

In the room with the green key door, look at the east wall to see a Hellstaff through a window; you can reach it by shooting the switch on the south wall of this chamber.

* The vertex count without the effect of node building is 716.