E3M4: Fried Fortress (M_ICYTUX.WAD) is the fourth map in the Armageddon episode of ZPack. It was designed by Icytux and uses for music track a MIDI version of "We Die Young" from the album Facelift by Alice in Chains. The par time defined in MAPINFO is 25:00. 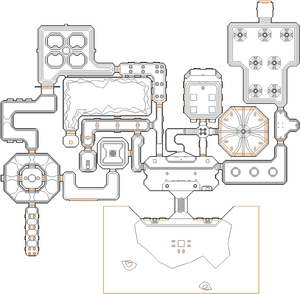 Map of Fried Fortress
Letters in italics refer to marked spots on the map. Sector, thing, and linedef numbers in boldface are secrets which count toward the end-of-level tally.

* The vertex count without the effect of node building is 5048.