E3M4: House of Pain is the fourth map of Inferno in Doom. It was designed by Sandy Petersen and uses the music track "Sign of Evil". The par time is 2:30. 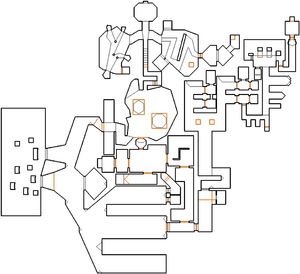 Collect the rocket launcher and rockets in this starting room, and go straight, heading up the stairs. Once you get to the top, just follow the hallway to a door. Open it to enter a bigger area, and kill all the monsters here. Then, run up to the 3 switches in this room. Hit the one in the middle, and turn around to see a platform rise (it will not work if the crushing pillar has been activated first), and collect the chaingun and goodies. Then, go back and hit the switch on the left, and turn around again and see a platform rise (as was mentioned before, it will not rise if the crushing pillar has been activated). Within the new platform that just raised, collect the invulnerability sphere and health. Now go back and hit the switch on the right. Then enter through the opening to the right of it. Follow this hall to another opening.

Go through the opening, and go straight. Enter the marble hall, and then go all the way straight in this hall (skip the two large openings to the right), and then there will be a walkway to your left. Skip it, and keep going eastward. Kill the lost souls and the baron that appears at the northern end on skill levels 3 and up, and get the blue key. Then turn around, backtrack and go right. Take another right into the walkway that leads north you skipped. Get to the other end of the room to the blue door. Open it.

Kill the imps in this room, and go straight, opening the door (across from the blue door, not to the left, the wall across from the blue door is a door). Then take a left, and in this room there is a blue square. Step on it a few times, and a door should open that you cannot open on manually. When the door is open, run through it, and go right. Follow this tunnel to another room, turn right, kill the imps in here, and run to the pillars that have switches. Go to the pillar on the left, and hit the switch on the west side of the pillar. Turn left, and go straight to a small blood pool, and turn right again. Go through the opening you just opened, and get the yellow key. Now go back, and hit the west switch on the right pillar. Take the eastern corridor and go straight to another blood pool, and go right, into another opening you just opened. Now open the yellow door, and get the red key. Return to the pillars, and hit the south switch on the right pillar. Now take the eastern corridor again and head right into another opening. Open the red door in this room.

Go left and then turn left, run straight through on the red rock (which does hurt, be careful), grabbing the health. Then, when you reach a room, drop yourself down. Turn right in this room and open the door southeast. Follow the hall to the exit door, and then go through the exit teleporter.

One "hanging leg" decoration (thing 283) has no flags set for any of the difficulty classes, so it does not actually appear in the level.

After the area with the crushers, you come to a room with demons at either side. After this room if you turn around and press use, it opens the sector as a door and then closes after. It can be opened again from that side but if you open the sector and go back towards the start, you will get trapped and have to kill yourself or load a saved game, or in online play restart the game completely. This can in some rare cases be triggered by a monster, much more likely in advanced source ports than in vanilla Doom.

Inside the giant room where one side holds the yellow key and the other holds the red key, there is a way to grab the key through the wall on the red key side. You must position yourself perfectly or this will not work. You must make a run straight into the wall precisely where the key is located on the other side. You cannot run along the wall, you have to run into it. This is a great technique for speedrunners.

* The vertex count without the effect of node building is 907.