E3M4: Pools of Despair (The Lost Episodes of Doom)

E3M4: Pools of Despair is the fourth level of Hell's Gate - The Red Spot of Jupiter, the third episode of The Lost Episodes of Doom. It was designed by Bob Carter and features a first cyberdemon fight. 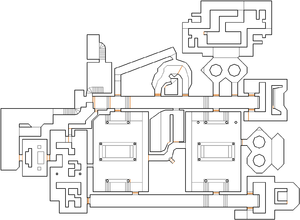 Map of Pools of Despair
Letters in italics refer to marked spots on the map. Sector numbers in boldface are secrets which count toward the end-of-level tally.

You start in a small gray area with supplies and a pack of imps to the south. Begin with taking the shotgun, chaingun and ammo for them. The next room has more shells and a rocket launcher. All you need is to ascend the stairs to the top room. This room has an artifact, an invulnerability sphere, and is followed by a cyberdemon room.

The situation is as follows: if you came from previous levels with enough ammunition and weapons to vanquish the cyberdemon you can take the invulnerability artifact and kill the cyberdemon with any powerful weapon. Otherwise, in case of the pistol start, you only have three weapons now. Despite that room has many boxes of rockets there will not be enough rockets to defeat it. In fact, killing it is not required but only to achieve 100% kills on the level. You always can return in this room if needed (see secret#2).

Once dealt with it you can see a lift at the south of that room and another invulnerability sphere. Ride the lift up to a cargo room. Destroy one barrel to kill a shotgun guy hiding next to it, then turn around and destroy the second barrel to kill another shotgunner. This room has some ammo, health and an artifact, partial invisibility. If you want the first unofficial secret see the paragraph below. Open the door to enter the second cargo room.

The second cargo room is more complex and has some optional supplies and numerous enemies. In any case, leave it via a narrow space on the east wall or a silver door in the south east. If you chose the door you will be in a green marble corridor covering the whole south areas. Here you only need the green door leading to a temple courtyard. This altar has green damaging nukage underneath but also has an invisibility sphere. It is very important to flip a switch in the courtyard that is located on the east wall of the south structure because this unlocks the exit. Now, ascend on the north stairs and enter the door to the second marble corridor.

In this corridor head all the way to the east end, and you will notice two wooden doors to the left and right. They lead to one place, so enter any. In the east of the room there is a blood-skin wall. Behind it is a switch. Wane it and notice an opened ambush in the south west of the room. Kill the enemies and enter this ambush. Although it contains nothing, stepping there is important because it opens the door in the north of the corridor. Now, leave via the wooden doors you entered and in the marble corridor go to the opened room where you see the red keycard. It is optional. In the room enter the outdoor portion. Go to the left or to the right and proceed further (bewaring of ambush dead ends) until you can see an opening to the south. Go there, collect plasma gun and other ammo and press the switch.

Get back to the marble corridor and take the nearby green door. You are now in a temple area similar to that one in the west of the map. Instead, this altar has safe water underneath and a soulsphere and a megaarmor. Turn left and enter the unlocked door. There are a number of imps in the room and they all do ambush. Destroy them all and collect the blue key.

The exit is in a hub which connects the west and east temple areas. If you walk through the vines on the middle wall of any temple area you can find a sign that can be opened with the exit switch behind it.