E3M4: The Great Library is the fourth map in the Shadowlands episode of Masters of Chaos. It was designed by Doom_Warrior and uses the music track from Heretic's E1M4: The Guard Tower.

This level contains a secret exit to E3M11: Cold as Ice. 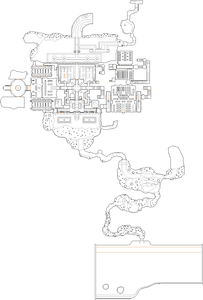 Map of The Great Library
Letters in italics refer to marked spots on the map. Sector, thing, and linedef numbers in boldface are secrets which count toward the end-of-level tally.

Follow the path through the trees, collecting any ammo pickups on the way. After passing through a sludge pool, go round the corner to a clearing where some nightmares are waiting - move forward slowly and be ready to fire your weapon at a moment's notice. Climb the steps and follow the dirt path to a set of bars blocking the way forward, then go south-east to find a tree trunk with a switch hidden in its north face which will open the way forward. Keep following the path until you see the library building in the distance - the entrance is protected by undead warriors, knight archers and a butcher.

Once they are dead, climb the steps between the fountains and go through the stone door to enter the library. Kill the enemies waiting ahead and go forward to a red crossroads. Go north from here and pass through the stone door in front of you. You will enter a green hall with many bookcases; approach the door in front of you with green key gizmos and take the Dragon Claw, then turn right and follow the wall until you reach a door with an animal skull on it. Turn right to see an invisible warrior in front of you. Once it is killed, climb the staircase south of where it was located then turn left and make a running jump to a hallway with a red floor.

As you land in the hallway, two alcoves will open ahead to release butchers and undead warriors. Kill them then follow the red floor to its end, turning left to kill one or two archers. Turn left again to find a corridor guarded by an ophidian, then go through the door behind it to find the blue key guarded by dark bishops. Taking the key will cause undead warrior ghosts, archers, sabreclaws and butchers to teleport into the hallway with the red floor.

Retrace your steps along the hallway with the red floor and drop to the floor below, then turn left and head straight forward to a door with blue key gizmos. Go through it and climb the stone steps, then head round the wide bookcase in front of you (guarded by dark bishops) and pass through an opening in the next bookcase to the west. A floor will rise on the left containing a number of archers - kill them and take the Chaos Device they were protecting. Go through a doorway due north of the artifact to enter a room with red floors, head straight forward between two of the bookcases then turn left to see an alcove with a switch which you need to press. Watch out for one or two invisible warriors lurking between the bookcases in this room.

Return to the plinth that held the Chaos Device and go through the south doorway this time, to a room containing nitrogolem ghosts. As before, head straight forward between the two bookcases in front of you and turn left to see another alcove with a switch. Press it, slay the disciples of D'Sparil that are released into the area then return to the Chaos Device plinth. Pressing the two switches has opened another area to the west - climb the steps to find a room with a round bookcase guarded by sabreclaws, undead warriors and archers (the door will shut behind you as you enter). Take the Enchanted Shield and Chaos Device in this room then look west of the bookcase to find a switch - press it and turn round, as one or two Bormereths will teleport in by the room entrance. Use the round bookcase to cover you from their attacks while waiting for the bookcase to lower.

Once the bookcase has lowered it will reveal a teleporter - step into it to return to the red crossroads where butchers have been released. Kill them then head east from the crossroads to a stone door which has now opened it, go through and follow the staircase to reach the upper library. At the top of the stairs, head through the door then go round the bookcase and through another door to reach a room with many tall bookcases - there are numerous monsters here including vampires and an invisible warrior, and the narrow passages here can make combat difficult. There are seven bookcases by the north wall of this room - a switch is hidden between the first two bookcases from the west, guarded by a vampire. After pressing this switch, head back downstairs and go north from the crossroads to return to the green hall.

Approach the green key door and turn right to see that the door with the animal skull has now opened - head through it and follow the staircase down to the basement. At the bottom of the stairs, head forward to a stone hallway and go through either of the doors on your right; you will enter a room with bookcases and wooden columns, guarded by sabreclaws as well as bishops on easy and medium skill levels or vampires on hard. Go to the bookcase in the north-west corner of the room and press the switch hidden on its east face, then return to the stone hallway and go through the door in the south wall to find another room full of bookcases. Head to the west wall of this room to find the green key sitting on a raised step.

Take the green key and return to the hallway where one or more ophidians have teleported in. Kill them and head back upstairs to the green hall, go through the green key door you passed earlier to get outside - a Bormoreth and one or two vampires are waiting nearby. Head straight forwards toward a gate guarded by two golems. When you reach the gate, look at the hedge on your right to see that part of it is translucent and walk through this section.

Follow the path between the hedges. Halfway along it, two alcoves will open behind and in front of you - the front alcove contains one or two roaches, while the rear alcove contains two weredragons on easy and medium or a Bormereth on hard. Fight or avoid these enemies and continue following the path to a cave. Follow the cavern past a magma pit until you reach the exit switch, which leads to E3M5: Quarry.

Refer to secret #4 below for information on reaching the secret exit to E3M11: Cold as Ice.

There is a staircase in the south-west corner of the green hall. Climb it and make a running jump to the hallway ahead (releasing a number of butchers from wall alcoves), then follow the hallway and turn right at the end. Turn right again to enter a passage guarded by an ophidian, and pass through the door in the north wall to find a Firemace guarded by two nightmares.

The upper library, accessed by going east from the red crossroads, has several points of interest:

* The vertex count without the effect of node building is 9665.

This level contains the following numbers of things per skill level, not including dark bishops and Discs of Repulsion which are spawned by scripts: