E3M4: The Herakleion (Curse of D'Sparil)

E3M4: The Herakleion is the fourth map of Curse of D'Sparil. It was designed by Kristian Käll (Kristus) and uses the music track from Heretic's E2M8: The Portals of Chaos.

This level is an alternate version of E3M4P: The Herakleion designed for use with Heretic-plus. Players using this executable or a source port that does not support MAPINFO will be sent here after completing E3M3: The Order's Chaos.

This level contains a secret exit to E3M9: The Brother's Onslaught. 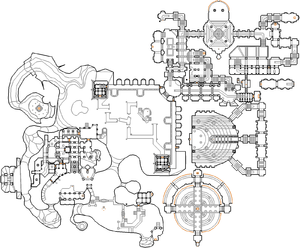 Map of The Herakleion
Letters in italics refer to marked spots on the map. Sector, thing, and linedef numbers in boldface are secrets which count toward the end-of-level tally.

On hard skill levels, all gargoyles will be replaced with fire gargoyles.

Head forward through the arch (collecting a Bag of Holding as you do so) to an area overlooked by numerous gargoyles, then turn left to walk between two fenced towers. The area ahead is guarded by a maulotaur; depending on how much ammo you have, you may wish to avoid it and go to the mossy ledge by the south wall, where you will find Gauntlets of the Necromancer next to a switch. Pressing the switch will lower two walls to the north, revealing a staircase leading up to a Silver Shield. Climb to the top to see two ledges ahead which will be guarded by golems, nitrogolems and undead warriors depending on skill level. Kill these monsters then run north across both ledges to a wall with an Energy Orb and a Crystal Geode. Turn left here and open the wooden door, where a Mystic Urn and a Quiver of Ethereal Arrows are guarded by more monsters.

Drop off the ledge to the floor below, then turn right and right again to find a passage guarded by three golems as well as sabreclaws. Kill them and head east through another door, then go through the doorway on your left to get outside. This area is protected by a large number of monsters - weredragons to the north-west, many gargoyles from the west, north and south-east, as well as undead warriors on the walls to the north and east. As soon as you go through the doorway, head due east to a broken walkway with an Enchanted Shield then climb up the small structure in front of you to find another switch. This will open the large wooden doors in front of you, which are guarded by two maulotaurs.

Go through the large doors and take the Silver Shield if you need it. There are two red lines on the floor which you can follow to the exit area - the line going north is arguably a safer route as it is shorter and only includes a maulotaur on medium and hard, while the line going east includes a maulotaur on all skill levels. In either case, you will eventually reach a stepped room with a Hellstaff in the center, which is guarded by another maulotaur to the north. Use your new weapon to kill it, then go to the south side of the room to find a switch in front of an exit door.

Pressing the switch will reveal four more switches elsewhere in the building, which must all be pressed to open the exit. Blue lines on the floor will help guide you to each switch, but watch out for monsters teleporting in after you press each one - these will include disciples of D'Sparil, ophidians, nitrogolems, undead warriors and iron liches.

After pressing switch #4, return to the exit door to find that it is now open. Go through and press the blue switch to finish the level and proceed to E3M5: The River of Ladon.

After pressing all four switches to open the exit, follow the directions below for secret #7 to obtain the green key, then use secret #8 to reach a passage with a green line on the floor. Follow this line past a number of gargoyles until you reach another teleporter which will send you to a large circular chamber.

The outer area is guarded by disciples and sabreclaws, while the inner area is protected by two to four iron liches and a number of gargoyles. Go to the south side of the inner area to find a stone door between two green key gizmos and open it, revealing two to four disciples guarding a switch. Press the switch to lower a teleporter in the middle of the chamber, which will take you to E3M9: The Brother's Onslaught.

As the level starts, head west to find a cave guarded by several gargoyles. Pass these monsters to find a Dragon Claw and four Energy Orbs.

After going through the arch in front of you at the start of the level, turn left to see an Ethereal Crossbow at the top of the stairs. After picking it up, turn left to find a Chaos Device and right to find a Wings of Wrath artifact - the latter item is needed to reach secrets #2 and #3.

After pressing the switch next to the Gauntlets of the Necromancer, climb up the staircase that is revealed then walk north until you drop into a trench. Turn left to destroy two sabreclaws, then climb the steps behind them and turn right and right again. Ahead is a door guarded by one or two undead warriors, and behind it are one to three disciples guarding a Shadowsphere, a Quiver of Ethereal Arrows and an Energy Orb.

Before going down the staircase leading to the broken walkway area, look south-east to find a set of steps leading to a Morph Ovum.

After using the teleporter to reach secret #5, leave the room you teleport into and follow the wall you are standing on to a Mystic Urn.

* The vertex count without the effect of node building is 8926.

The large doors leading to the latter part of the level appear to swing open slowly when triggered. This is controlled by a voodoo doll which triggers a series of "Floor Lower" actions.