E3M4: Torture Chambers is the fourth map of Inferno in Doom the Way id Did. It was designed by Captain Toenail and Jason Root (Hellbent) in the style of Sandy Petersen. The par time defined in the DEHACKED lump is 1:30. 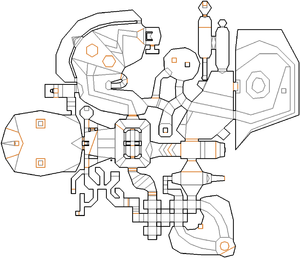 Map of Torture Chambers
Letters in italics refer to marked spots on the map. Sector, thing, and linedef numbers in boldface are secrets which count toward the end-of-level tally.

Approaching the shotgun causes the ceiling to start moving up and down. Use caution as you grab it, and you have three choices of travel. There are a number of enemies coming from the room to the north, so go there and drop into the blood river and go right to a new area. Hit the switch here to lower the blue skull key and ride the lift up. Now cross the river again (there is a ledge to the right for you to climb if you fall in the river) and return to the nexus at the start. Enter the oval-shaped hall to the west. There are two blue doors here. The one leading into the middle of this structure has a chaingun and imps facing away from you. Do not shoot anything here, instead, grab the chaingun and several crushers will kill the imps for you. Press the switch in this room to raise a bridge to the west. You will not be able to do anything here until you obtain a yellow key though. Head through the other blue door leading to a new area with a catwalk. Traverse this catwalk and if you intend to get the supplies, watch out as they are under crushers. Traverse the second catwalk and go around the structure to retrieve the yellow key. Backtrack to the oval-shaped room, go across the bridge, and open the yellow door to pull the switch lowering the barriers to the westernmost room. Make sure you grab a nearby radiation suit before venturing in this large lava room. Here, go all the way to the other side of the column on the far end. Look out for two barons of Hell who appear from the two columns in the lava. Flip the switch here to lower a teleporter. Take it, and you will end up back at the room north of the starting point, with a door containing lost souls open and straight ahead. Go through here killing the monsters on the way to the exit.

* The vertex count without the effect of node building is 849.