E3M5: Blood and Guts is the fifth map in episode The Evil Unleashed in the 10th anniversary edition of 2002 A Doom Odyssey (it did not appear in the original edition). It was designed by Paul Corfiatis and uses the music track " ". 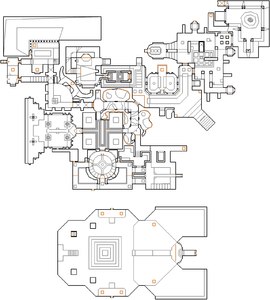 Map of Blood and Guts (10th ed.)
Letters in italics refer to marked spots on the map. Sector numbers in boldface are secrets which count toward the end-of-level tally.

It is actually not possible to achieve 100% secrets and reach the secret exit. Although there is a way back to the rest of the level from Secret #6, there is not a way out once you enter the final arena (where Secret #7 is). You will be forced to take the normal exit if you wish to get 100% secrets in this map.

* The vertex count without the effect of node building is 2926.