E3M5: Chapel of Scorn is the fifth map of Inferno in Doom the Way id Did. It was originally designed by Paul Corfiatis and later edited by Gus Knezevich (Alfonzo) and Sarah Mancuso (esselfortium). The final map resembles Sandy Petersen's style more than any other id mapper. The par time defined in the DEHACKED lump is 3:30. 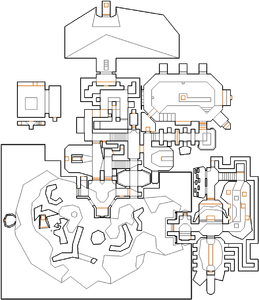 Map of Chapel of Scorn
Letters in italics refer to marked spots on the map. Sector, thing, and linedef numbers in boldface are secrets which count toward the end-of-level tally.

Head through the right door and follow the passage up to a switch. Press it to raise a bridge to the other side, but watch out for imps both in front and behind you. Cross to the other side and flip the switch to access the valley. Here, go to the left, making sure to pick up the radiation suit in the blood and enter the small cave here with a switch. This opens a door on the far east side of the valley. Go through here taking the one path you are able to take, down the lift into the next door. Climb the stairs and follow the path to the red skull key. Now drop down and find the red door you passed along the way and hit it and the switch behind it. Now go to the other door that you could not open before and carefully cross the bridge to get to the next switch. This raises some stairs near the red door. When you go up the new set of stairs near the red door you will reach a teleporter leading to the yellow key.

Drop down and open the door to be back at where you started and open the yellow door here. Head inside of the red structure to find a switch, which opens the next door. In here, the set of stairs to your right need to be raised. Go left and down the lift into a maze-like area. Find the switch in the northern part of the maze, this will open up a door to the southeast. Take this passage until you find the next switch. You will release several monsters, but also raise the aforementioned stairs, so head back there. You will see the blue exit door on your left, and another passage to your right. Take this passage picking up the chaingun if necessary and traverse through the hall with crushers. On the other end, go through the door into the open area. You will see the blue skull key on a pedestal. To get it, go around the perimeter to a switch, which builds a bridge to the key. Grab it, but be careful of monsters appearing from several directions as you do. Backtrack to the blue door, looking out for the duo of barons, and exit.

* The vertex count without the effect of node building is 1451.