E3M5: Dungeons of the Dark (Serenity)

E3M5: Dungeons of the Dark is the fifth level of Serenity. It was designed by Bjorn Hermans and Holger Nathrath, and includes a custom music track. 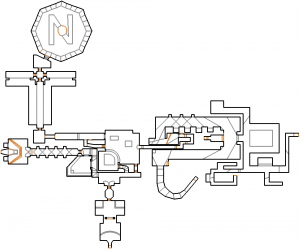 Map of Dungeons of the Dark
Letters in italics refer to marked spots on the map. Sector numbers in boldface are secrets which count toward the end-of-level tally.

There are no official secrets in this level but you can jump without the blue key in the rocket launcher room.

In the blue key room, if you back off the platform at the top of the stairs as it rises, it will become impossible to finish the level without the noclip cheat, as there is no way to call it back down again.

Thing 122, a spectre, is placed in a space (sector 111) which is too small for it to fit in, and is thus immobilized.

* The vertex count without the effect of node building is 871.

An early version of this map appeared as E2M3 of the collection "Nathrath's Fab Four" (NATHRATH.WAD).[1]