E3M5: Evil Comp is the fifth map of Back to Hell. It was designed by David Seager. 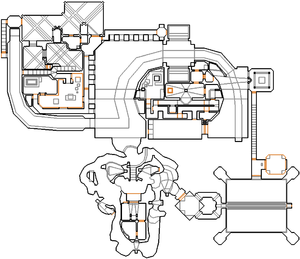 Map of Evil Comp
Letters in italics refer to marked spots on the map. Sector, thing, and linedef numbers in boldface are secrets which count toward the end-of-level tally.

As it is impossible to receive credit for secret #5, the maximum achievable secret percentage on this level is 88%.

Near the red key is a shotgun whose platform has four sides, each of which is a W1 linedef closing the entrance door to this room. The switch by the red key (linedef 1038) has a S1 action, thus can only be used once to open up the exit door. This means that if, after pressing this switch, you return to the shotgun platform, you could end up trapped.

* The vertex count without the effect of node building is 1928.