E3M5: Forgotten Caverns is the secret map of the Woe episode of No End In Sight. It was designed by Emil Brundage (NaturalTvventy).

This level includes a secret exit to E3M6: Anomaly Retribution. Due to the episode's unusual map progression, the map's normal exit will instead take you to E3M9: Lake of Fire. 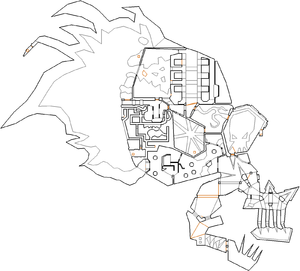 Map of Forgotten Caverns
Letters in italics refer to marked spots on the map. Sector, thing, and linedef numbers in boldface are secrets which count toward the end-of-level tally.

Step across the lava in front of you, turn left to find a chaingun on I'm Too Young To Die (ITYTD) and Hey Not Too Rough (HNTR) skill levels then head west over a wooden step to a room with gray walls. Turn right to see a small area with a shotgun and megaarmor on ITYTD and HNTR, or three shotgun guys and a chaingun on Hurt Me Plenty (HMP) skill level or higher; when you approach the megaarmor/chaingun a wall will open to the west revealing one to four cacodemons. Step through this wall and another wall will open next to it, revealing one to four barons of Hell guarding a switch (on ITYTD and HNTR, there will be an invulnerability pickup in the room as well). Flip the switch behind the barons to open the doors either side of it, then follow the passage south and east down some lava steps to reach a supercharge and the yellow skull key.

Kill the imps that teleport in at the top of the lava steps, then backtrack to where you found the megaarmor/chaingun then head north round the vine-covered windows to a room with more imps and a yellow key door. Go through the door to enter a room with a skull-shaped lava pool - when you enter the lava the surrounding walls will lower to reveal some cacodemons as well as another door in the west wall, leading to a curving walkway over a harmful water pool. Cross the walkway and open the door on the other side, then head north through a red hall with three crushers and go round the corner to a blue room with some silver platforms over a lava pit, then run across the west platform to collect the red skull key; do not stop on the platform as it will fall into the lava.

After getting the red key, go through the door on the south side of the red key room then walk south-west to find a narrow doorway leading into a fleshy maze populated by lost souls and barons. There are two eye switches in the maze, one in the north-west corner and one in the south-east corner, that need to be pressed to lower two bars blocking the exit door at the end of a passage on the west edge of the maze. After pressing both switches, find the exit door and step on the white teleporter (guarded by one more baron on Ultra-Violence and Nightmare skill levels) to go to E3M9: Lake of Fire.

To reach the secret exit safely you will need a radiation shielding suit or an invulnerability; on HMP or lower, you can step on the moving platform in the south-east corner of the crusher hall to find a suit (you may want to wait until the rest of the level is clear of monsters before proceeding). With the suit, backtrack through the yellow key door then head west into an outdoor area with many white rock walls (you will find a chaingun by the entrance on ITYTD and HNTR), continuing due west until you reach a plasma gun in front of a switch. Press the switch and a lift below you will take you down to a large lava pool; head north-west through the lava to enter a narrow passage that ends with an exit door requiring the red key. Go through the door and step on the white teleporter behind it to move on to E3M6: Anomaly Retribution (you will also trigger secret #6 in the process).

Step on the west moving platform in the middle of the crusher hall to reach a ledge with various items including an armor, chaingun, rocket launcher and plasma gun.

Another rocket launcher can be found in the north-east corner of the outdoor area with white rock walls.

Near the center of the flesh maze is a red cavern with an invulnerability and a computer area map.

* The vertex count without the effect of node building is 1546.