E3M5: Mountain of Fire is the fifth map of episode 3 of Heretic Treasure Chest. It was designed by Walter Confalonieri (daimon) and uses a MIDI version of the "Malek's Bastion" theme from Blood Omen: Legacy of Kain as its music track. 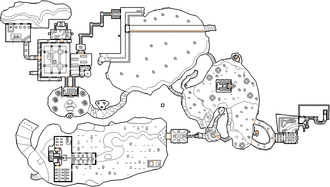 Map of Mountain of Fire
Letters in italics refer to marked spots on the map. Sector, thing, and linedef numbers in boldface are secrets which count toward the end-of-level tally.

Take the Ethereal Crossbow, Bag of Holding and Quivers of Ethereal Arrows in front of you then head north up some steps guarded by sabreclaws. You will see a brick building in front of you surrounded by undead warriors - open the door on the east side to confront a disciple of D'Sparil, then use the north or south lifts to reach a passage leading to a small chamber with three small pillars which have the three keys on top of them. Push the pods out of your way (they will respawn) then press the switch next to the green key gizmo to lower the pillar holding that key.

Take the green key then leave the building and head south-west to a curved staircase running round a lava pit, which you can follow to a tunnel containing a Dragon Claw and orbs. Turn left at the other end of the tunnel and follow the path down another staircase until you reach a cavern containing a Shadowsphere and several nitrogolems, then climb the steps leading up to the green key door and open it to find two staircases. Go down the left-hand staircase to a large hall containing many enemies, including three iron liches, then go through the south-east doorway and press the switch ahead. Go back up both staircases to the top floor and walk through the doorway on your right, then head north past several enemies to a large door which will open as you approach to reveal two weredragons. Follow the passage behind the weredragons north and east past some ophidians until you reach another door and open it to find yourself on a large green path with some nitrogolems. Turn left and follow the path to a set of steps that will put you on the battlements, then follow the wall west and south to a small structure containing a switch; this switch will reveal a teleporter in the wall behind you that you should step into.

The teleporter will put you on a walkway above the large hall you saw earlier. Destroy the iron lich ahead and go round the corner, then open the door in the left-hand wall to find a weredragon guarding a switch; the switch will raise a platform allowing you to continue following the walkway north and east to a door which will open as you approach it. Enter the storeroom and head down either of the staircases in the north wall to find an iron lich guarding another switch. Press it then backtrack to the green battlements, killing a maulotaur on the way, and return to the switch you pressed earlier - a set of bars has lowered, allowing you to continue south and west to a switch next to a blue key gizmo which is guarded by a second maulotaur. Press the switch then backtrack to where you found the green key, passing a number of nitrogolems that have teleported in on the way, where a second pillar holding the blue key has lowered.

Leave the building and head south-east until you drop into a lava pit, then head east over the ice islands to a tunnel leading to a blue key door. Open the door and destroy the sabreclaws waiting behind it, then head forward into a chapel and open the door in the north-east corner to find some steps leading down. Walk round the lava trench in the next area to find a switch next to a yellow key gizmo and press it, then backtrack to the large lava pit you dropped into earlier and use the teleporter inside the cavern in the east wall to get back to the starting point. Push past the disciples and fire gargoyles that have teleported in, then return to the building with three keys where the pillar holding the yellow key has lowered.

Return to the starting point and head west up some stone steps then drop into an icy cavern with some sabreclaws. Head west to a set of wooden bars and open them using the neighboring switch, then head through the yellow key door and follow the passage behind it to a room with nitrogolems (plus two iron liches on bringest them oneth (BTO) skill level or higher). Ride the metal lift in the west wall up to a large graveyard then turn left and head towards the fenced area in front of you. Press on the skull wall in this area to lower it and reveal a switch, press it then head west to enter the church. Head west to an area with a green trident on the floor and kill a maulotaur that teleports in along with the other enemies in this area, then open the door by the north pews to reveal another door leading to a teleporter which will put you on a platform overlooking the trident room. Kill the ophidian and press the switch behind it, return to the floor below and go to the south pews then open the door here to find a staircase leading up to a room with a Phoenix Rod and ammo. Head east into a chamber with a Tome of Power and Quartz Flasks and press the switch in the south-west corner.

You now need to backtrack to the green key door, fighting your way past nitrogolems and fire gargoyles that have teleported into the level; when you reach the green key door, go through it then go down the stairs to the large hall where some fire gargoyles will teleport in. Head through the west door and follow the passage behind it to an open door, which has an iron lich in front of it and sabreclaws behind on BTO or higher. Go through the door and press the switch on the white "computer terminals" to lower a wall behind you, kill the disciples that teleport in then go through the door and head north-west around the metal block to find a switch next to a blue key gizmo. After pressing this switch you need to return to the chapel in the south-east corner of the level and use the staircase in the north-east corner to return to the area with the lava trench. This time, drop into the lava trench and follow it east to an open door then go up three sets of stairs past some weredragons and ophidians to the exit door. Open the door and press the switch behind it to finish the level.

Drop into the lava pit near the starting point and head to its south-west side to find two crystal vials, Greater Runes, a Claw Orb and a Silver Shield. This is the only armor item in the entire level.

Go round the outside of the church in the south-west corner to find a dock with four stacks of Mace Spheres. A Firemace can also spawn here.

* The vertex count without the effect of node building is 11490.