E3M5: Quarry is the fifth map in the Shadowlands episode of Masters of Chaos. It was designed by Doom_Warrior and Caleb26, and uses the Hexen music track "Perc". 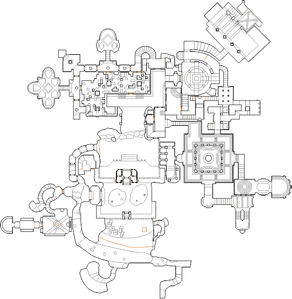 Head west along the lava stream, jumping between the islands to minimize damage. When you get outside, jump north to dry land and take the Ethereal Crossbow by the crates (watching out for the Bormereth on a ledge to the south), then continue following the lava north until you reach an area guarded by fire gargoyles and weredragons. Jump east to dry land (the lava ends with a lethal pit) then head north to a tunnel with wooden supports. Follow the tunnel and drop off a ledge leading back outside.

Prepare yourself, as a door will open on your right to release a maulotaur which must be killed to progress. Once it is dead, a large rock to the north will lower allowing you to pass through to a grassy area with weredragons. Head north towards a door at the top of a flight of stairs guarded by knight archers, and go through it to a storeroom full of crates. Kill the butchers that are revealed as you enter, then make your way to the north-east corner and go through the door here.

Go down the stairs in front of you to find a stone room with many barrels. Check the doorway on the west side of this room to find a switch being guarded by a nitrogolem ghost, then press the switch and go back up the stairs. Follow the hallway west through several sloped archways and go around the corner to see some undead warriors and ophidians approaching from an alcove to the south. Kill them and approach the alcove, turning left to find an open door back to the crate room. Pass through it and search the south wall for a switch waiting to be pressed.

Pressing the switch will lower the surrounding crates to release roaches - use the crates to give you cover as you fight them one by one. Go back outside to find that nitrogolem ghosts have been released into the grassy area, then head to the north-east corner of this area to find a stone doorway guarded by sabreclaws. As you step through the doorway, a shadow beast will rise from the water in front of you - kill it and head up the stairs to the south.

Go through the door at the top of the stairs then head straight forward to go down a set of steps next to some barrels then turn left to find a staircase leading to a room with a crushing ceiling. Time your run past this trap and turn right to see another set of steps - when you start down them, an alcove with two undead warriors will open behind you. Follow the stairs to a room with wooden columns then go straight forward to enter the doorway in the south-east corner.

Press this switch and fight off the enemies that are revealed, then backtrack past the crusher and go west up the steps to an earlier room. Go west down a set of steps next to some barrels, then turn left and left again to find a Bormereth at the top of some wooden steps - slay it then climb the steps to a square yellow hall. Head round to the south side of the hall and go through the wide doorway guarded by three roaches, then turn left and climb the steps to a tiled room.

The north part of the room is guarded by sabreclaws and an ophidian - turn right and climb the steps to see a switch guarded by two vampires. Press it then return to the square hall where a number of enemies are teleporting in, then go round to the north side of the hall where a stone wall is moving up and down; step through it to find a quicker route back to the room with wooden columns. In this room, the north wall has opened to reveal a butcher - kill it then climb the stairs and follow the stone walkway round. Watch out for green chaos serpents that appear from behind a wall in front of you.

Take the Frost Fang that the serpents were guarding, then turn right at the end of the walkway and climb the steps to an area with a large pool of water. Turn left and follow the walkway round the pool to a set of steps, killing the butchers and nitrogolems at the top before pressing the switch in the south-east corner of the room. This will open a wall behind you to release sabreclaws - kill them then step into the teleporter they were guarding to be sent to a ledge with the yellow key.

Taking the yellow key will release a number of disciples of D'Sparil and dark bishops into the area below you, where you fought the shadow beast earlier. Fight the new enemies off until the barrier blocking the west exit from the area lowers, then backtrack to where you fought the maulotaur and climb the steps to pass through the door it came from, taking the Bag of Holding in the area. There are two doors here flanked by yellow key gizmos - open the west door and press the switch behind it to lower a lift.

Ride the lift up to get on top of the wall then follow the path to a stone door. Go through it and follow the tunnel round to a switch but do not press it immediately, as the wall on your left will lower to reveal weredragons. Kill them then press the switch and head back to the yellow key doors - open the east door this time and press the switch behind it to lower another lift, which will put you on the other side of the wall. Follow the wall and go through the gray door which has now opened.

Turn left and climb the steps, watching out for the monsters in this area. There is a switch in the north-east corner next to a Quiver of Ethereal Arrows, which opens the nearby door leading back to the square hall. Go through the door to find that the walls of the central structure have lowered to reveal three iron liches; after destroying them, go into the central structure and press the switch in the east wall to lower a set of bars blocking the east exit from the hall.

Go through the bars and down the steps guarded by nitrogolems, then turn left at the bottom to see the blue key being guarded by gargoyles and a disciple.

Take the blue key then go back upstairs to find more enemies teleporting into the hall. Fight or avoid them as you see fit, then backtrack to the top of the wall near the yellow key doors. South of the wall is an enclosed area with two magma pits - drop into this area and go to the silver door in the south wall, then open it and the door behind it to return to the area you found at the start of the level.

Head west and north along the lava river again until you return to the cavern where you first encountered the weredragons, then look west to see a wall with blue key gizmos on either side. Go through this wall and kill the chaos serpent waiting behind it, then go up the staircase on your left to a room with an octagonal central column. Kill the archers and undead warriors in this room then pass through the door in the west wall, following the hall behind it to a chamber with a butcher and two more archers.

Kill these enemies then press the switch hidden in the north-east wall, which will release a number of sabreclaws into the neighboring hall. Fight your way past them and go back through the door to find that the octagonal column has lowered, revealing a teleporter. Step into it and kill the two weredragons in front of you, then follow the passage to find yourself on a ledge overlooking the starting area. As you get outside, the pillar with the exit teleporter will lower in front of you; kill the Bormereth here if you have not done so already, then jump over the lava river and step into the teleporter to finish the level.

After getting outdoors at the start of the level, stand on the large area with the crates and look at the east wall to see a small cliff face. There is a passage here leading to a Hellstaff - watch out for fire gargoyles ambushing you from behind as you approach the weapon.

When you reach the end of the lava river, look east to see a platform. Ride it up to the top to find sabreclaws guarding several pickups, including a Phoenix Rod hidden behind some barrels. Use the door at the south end of the magma pit below to escape.

A hallway runs round the north and west sides of the crate room, with two rooms branching off of it. The west room contains golems, sabreclaws and butchers along with a Mystic Urn, a Firemace, Greater Runes and two Energy Orbs. The north room holds a Skull Staff as well as sabreclaws.

Before going down the steps to the square hall (guarded by a Bormereth), head south and go round the corner to find a Dragon Claw being guarded by an ophidian.

After going through the blue key door, go down the staircase on your right to reach a lava pool containing a Shadowsphere and Greater Runes.

There are lava trenches in the rooms south of the blue key door. The back sides of the walls in front of these trenches have no textures, causing a minor hall of mirrors effect (though the player must be standing inside a trench to see it).

* The vertex count without the effect of node building is 5005.