E3M5: The Cat-Skinner Box is the fifth level of Hell's Gate - The Red Spot, the third episode of The Lost Episodes of Doom. It was designed by Bob Carter and features an optional battle with two villains. 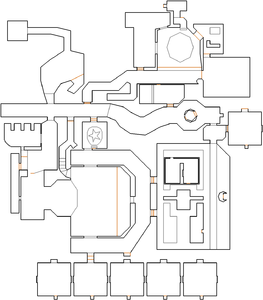 Map of The Cat-Skinner Box
Letters in italics refer to marked spots on the map. Sector numbers in boldface are secrets which count toward the end-of-level tally.

The map is full of optional areas that can be skipped. In addition to this, it features a boss battle with both a cyberdemon and a spiderdemon. This battle can be skipped unless you want to spend time.

The exit on the level is locked again, and a fair player should find a button to lower the block. However, due to a bug in the design of the map, the barrier is ineffective on the level and can ?.

Take the shotgun and chaingun (not in HMP). Leave the room and go down with the lift or jump from the window in the room. Go to the north wooden-tile corridor. Head to the right and take the first white door to the left. In the outdoor area head right and all the way forward (you can visit an optional room behind the door or enter an alcove to the right). You should now encounter the spiderdemon on the circle ledge. You can kill it if you want, however doing this will prevent an infight between cyberdemon from being. In the east of the outdoor area is a dark room. Each time you enter it a lift inside it will lower. You may need to collect some items first before stepping on the lift. The lift leads you to a computer terminal room with a window from which you can jump over the circle ledge. Jumping from this window also causes the overall floor surrounding the circle ledge to rise, so the cyberdemon will also appear. If you have not killed the spiderdemon yet you can provoke an infight.

To exit the level flip the wizard switch in the north from where the cyberdemon came out. This causes the floor to sink down letting you enter the exit room with the exit switch to finish.