(Redirected from E3M5: The Ophidian Lair)

E3M5: The Ophidian Lair is the fifth level in The Dome of D'Sparil episode of Heretic. It uses the music track "Ded", created by Kevin Schilder. 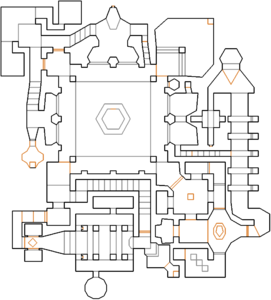 Map of The Ophidian Lair
Letters in italics refer to marked spots on the map. Sector, thing, and linedef numbers in boldface are secrets which count toward the end-of-level tally.

Press the switch in front of you to be lowered into a square room which is overlooked by ophidians; there is also a cage in the north-east corner holding iron liches and/or a maulotaur. Go to the south-west corner of the room and kill one or more ophidians that are released from a closet to the south, then head east up a staircase past some sabreclaws to reach a door. Open the door and go round the corner to enter a hall lined with braziers, kill the gargoyles infesting it then head west to reach the yellow key. Watch out for three closets containing more gargoyles that open when you take the key, along with another closet to the east containing one or more disciples of D'Sparil.

Go back to the starting room and open the south-east door behind the yellow gizmos to enter a mosaic room where one or two ophidians are guarding a column with four switches - the switches will open different closets containing more ophidians along with sabreclaws, but only the east switch (which opens the south wall) is mandatory. Go through this wall then head east around a column (containing the green key) to find a door leading to a stone corridor. Follow the corridor north past some gargoyles to a Dragon Claw (taking it opens a closet with one or more disciples and a Chaos Device), then continue south past a couple more gargoyles to a switch. Press the switch and kill any disciples that are revealed behind you, then backtrack along the corridor past some sabreclaws to return to the mosaic room where you can now collect the green key.

Go back to the starting room and open either of the doors in the north-west corner, destroy any waiting sabreclaws then head east up a staircase to reach a stone ledge. Press the switch recessed into the north wall then go back down the stairs before proceeding south up a second staircase. Kill a disciple waiting behind a door that has opened in front of you, then step on the teleporter behind it to finish the level.

Taking the yellow key will open a passage in front of you containing gargoyles. Follow the passage round to a lift that will take you down to a Tome of Power.

Taking the green key opens several chambers around you. The chamber to the west holds Gauntlets of the Necromancer, while the south chamber contains a Bag of Holding; taking the latter item will trigger an ambush by two or three sabreclaws.

Go through either of the green key doors, then north-west to a chamber with some barrels. There is a winding passage here that leads east to a Mystic Urn.