E3M5: The River of Ladon (Curse of D'Sparil)

E3M5: The River of Ladon is the fifth map of Curse of D'Sparil. It was designed by Kristian Käll (Kristus) and uses the music track from Heretic's E2M3: The River of Fire. 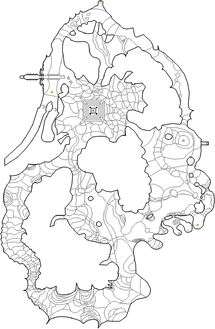 Map of The River of Ladon
Letters in italics refer to marked spots on the map. Sector numbers in boldface are secrets which count toward the end-of-level tally.

In this level, you may want to avoid firing weapons for as long as possible as it will alert a large number of monsters. Making noise near the center of the level can lead to you being surrounded by fire gargoyles, sabreclaws and weredragons.

You start the level facing a pillared structure. Take the weapons, ammo and Tome of Power around the structure then head east to go down some steps into a tunnel guarded by weredragons. Follow the path south and destroy any approaching sabreclaws and weredragons (plus an iron lich on hard skill levels) then look east to see a rock platform with three Flame Orbs. The ledge east of this platform is guarded by ophidians and more weredragons, which should be destroyed before you step across.

Head south down the steps, watching out for any weredragons and ophidians blocking the way, until you reach a teleporter. Step into it to reach an enclosed area with a switch - kill the undead warriors in front of you then press the switch, which will lower a second teleporter to the west visible through the bars. Step back into the teleporter and retrace your steps to the cave entrance, then head east into the teleporter you just lowered. You will reach an elevated area with four undead warriors (which will be ghosts on hard skill levels) - kill them and take the Quartz Flask and Tome of Power in the windows, then head east down a set of steps to find several ophidians guarding a switch. Pressing the switch will reveal the blue key back at the starting area.

Backtrack through the teleporter and return to the start point, then collect the blue key sitting in the middle of the pillared structure. From here head north-west to find a bridge over a lava river which is protected by two iron liches on hard skill levels. Cross the bridge and open the stone door on the other side, behind which you will find two disciples of D'Sparil on easy, an iron lich on medium or a maulotaur on hard. Once the passage is clear, follow it to the exit door and press the switch behind the door to finish the level.

From the start of the level, go east down some steps into a tunnel then head south until you reach the edge of a lava pool. Go west from here through an area and follow the path to a Phoenix Rod. You can also collect two stacks of Greater Runes and three Energy Orbs on the way.

* The vertex count without the effect of node building is 3806.