E3M5: The Spirit Underworld 1 (M_SOLOTSU.wad) is the first part of the fifth map in the Armageddon episode of ZPack. It was designed by Hnsolo77 and uses the music tracks "Iifa Tree" from Final Fantasy IX, composed by Nobuo Uematsu, in a MIDI version sequenced by Jeff Copperthite, and for the boss fight a MIDI version of "Esper Battle" from Final Fantasy XII, composed by Hitoshi Sakimoto. The par time defined in MAPINFO is 27:00. 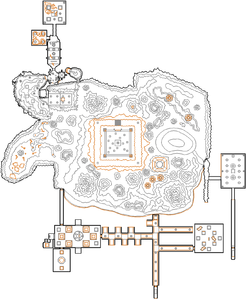 Map of The Spirit Underworld 1
Letters in italics refer to marked spots on the map. Sector, thing, and linedef numbers in boldface are secrets which count toward the end-of-level tally.

To reach the secret exit, in the room with the eye switch on the pentagram, press the switch. A cacodemon pops out from the wall to the west, along with some other enemies. You need to aim at the floor with the rocket launcher while underneath the west wall and jump up to reach this area, where you will go through the wall. The switch here will reveal the secret exit, which is all the way through the hall to the east, and then north through the pink flesh. Also near the switch that reveals the secret exit is another secret message to find. You will also get a megasphere.

* The vertex count without the effect of node building is 12567.

As the name suggests, this map (and the one following it) take heavy inspiration from MAP28: The Spirit World from Doom II.