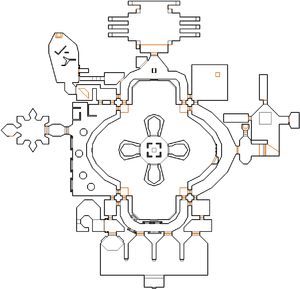 Map of Unholy Cathedral
Letters in italics refer to marked spots on the map. Sector, thing, and linedef numbers in boldface are secrets which count toward the end-of-level tally.

Pressing use on either of the south jambs of the door east of the north-east teleporter in the central area (linedefs 609 and 611) will crash the game.

If you enter the east-most room, trigger walk-linedef 1276 which closes a ceiling behind you, and quickly escape the room the way you came, then the room can never be entered again. The map can still be finished, but not with 100% kills.

In the northernmost chamber there are three crushing pillars, each of which protects a button. However, it is not necessary to step under an open pillar to get a switch hit. This is due to an engine limitation that, in this case, allows the player to trigger the buttons from the edges of their walls, while standing safely outside of the pillars. The event is possible even if the crushers cover the switches at the moment they are clicked. This can also be seen as the best way to solve this puzzle, how to hit the switch without taking damage.

Although the level is credited to Sandy Petersen, he later stated the infamous teleporter courtyard was designed by Tom Hall, but he did take part of the blame because he "didn't fix it"[1].