E3M6: Chequer Temple is the sixth map of episode 3 of Heretic Treasure Chest. It was designed by Mivalekan and uses the music track "Palace of Inner Chambers" from Hexen II. 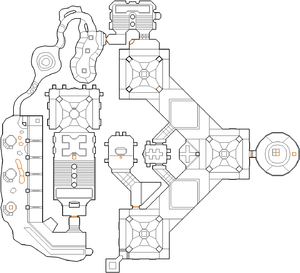 Map of Chequer Temple
Letters in italics refer to marked spots on the map. Sector, thing, and linedef numbers in boldface are secrets which count toward the end-of-level tally.

Take the Ethereal Crossbow and arrows in front of you, which are in a square chamber containing nitrogolems (as well as undead warriors on bringest them oneth (BTO) skill level or higher). Head north-east over a tiled floor past one or more weredragons to a second chamber, then continue north and north-west past some nitrogolems and sabreclaws to a third chamber. In this third chamber, step over the lava to a Dragon Claw then look south-east to find a switch that will release three nitrogolem ghosts behind you (replaced with undead warrior ghosts on BTO or higher). Go back to either of the tiled floors you stepped over earlier to find that a door has opened on your right; step through it to enter a room containing ammo as well as the yellow key. Watch out for the ophidians and sabreclaws that are released around you when you approach the key.

Return to the third square chamber, where a weredragon (or iron lich on BTO or higher) has been released, then look north to see some metal bars next to a yellow key gizmo; open them then press the switch to lower the bars blocking the nearby archway. Go through the arch and climb the stairs past some sabreclaws and disciples of D'Sparil to a stone door which leads to a lava river, head up some curved steps past some weredragons then follow the lava west and south until you drop into a cavern with sabreclaws and a weredragon (there may be a Firemace in this cavern as well). Continue following the lava south until you get outside and pass three tan platforms; when you reach the third platform with a weredragon on it, go up the steps next to the platform to find a teleporter that will put you on the nearby walkway. Follow the walkway past some weredragons, disciples and an iron lich to a gray door, open it then head north past some more weredragons until you reach a magma pool containing a Phoenix Rod. Continue on to a gray room with nitrogolems and undead warriors and press the switch on the north wall, which will release more nitrogolems (or ophidians on BTO or higher) as well as opening the column behind you - this contains the green key as well as an undead warrior, or an iron lich on BTO or higher.

After taking the green key, return to the magma pool that held the Phoenix Rod and climb the steps here to a teleporter that will return you to the second square chamber near the starting point. Go back to the starting room and open the door between the green key gizmos, then follow the passage to a room containing one or two iron liches as well as a couple of disciples - after clearing the room, go round to the back of the gray altar to release some ophidians then climb on top of the altar to reach the blue key. Push past the weredragons and sabreclaws that are released then go back to the second square chamber and open the blue key door to confront some ophidians and sabreclaws. Walk round the circular brick wall in this room to find some disciples guarding what looks like the exit teleporter; however, standing on the teleporter will lower the circular wall and reveal weredragons and nitrogolem ghosts. Destroy the golems then climb the steps they were occupying to reach the real exit.

After collecting the yellow key, return to the second square chamber (with the blue key door) - a closet has opened containing sabreclaws, ophidians and weredragons along with a Hellstaff.

After getting on the walkway leading to the green key area, search the alcove that the iron lich was waiting in to find an Enchanted Shield.

* The vertex count without the effect of node building is 1757.