E3M6: Depths is the sixth map of Inferno in Doom the Way id Did. It was designed by James Cresswell (Phobus) in the style of Sandy Petersen. The par time defined in the DEHACKED lump is 1:30.

This level contains a secret exit leading to E3M9: Lake of Fire. 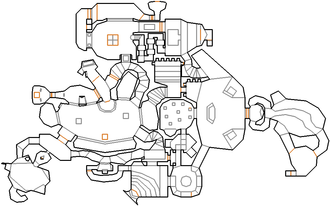 Map of Depths
Letters in italics refer to marked spots on the map. Sector, thing, and linedef numbers in boldface are secrets which count toward the end-of-level tally.

You are next to several barrels. Try not to shoot the barrels here, instead head down the passageway as quickly as you can, because barrels will explode behind you. Drop down and pick up the shotgun. Picking it up triggers a large monster ambush from three sides. There are a number of paths you can take at this point. If you climb the stairs to the northeast, you will find the yellow door and a room with a chaingun. The secret exit and the blue skull key can be accessed from here. If you go southwest instead, you can drop into the blood and see the red key. To retrieve it, go west and around out of the blood until you find an opening northeast. Go around the structure to get the key. You can go east from this area down the blood hallway, further pressing on and you will find a small spiral staircase downwards. There is a large room to the east with the red door and the plasma gun. With the red key, go through the door here, drop down, and follow the path to the yellow skull key. Take the teleporter to appear back in the plasma gun room, with two barons of Hell on the sides. Now you can go to the normal exit if you choose so. To do that, head back to the hub, and climb the set of stairs to the northeast. Open the yellow door to open the one behind it, and exit here.

If you want the secret exit, you need to do two things. First, you must open the way to the exit, and second, you need the blue skull key. To open the way, return to the plasma gun room. Find the set of gargoyle faces with torches in front of them to the northwest. Find the one that is behind a blue torch. Shoot this one and then return to the hub that had the shotgun trap. Through the eastern monster closet is a new passage, enter it and grab the soul sphere to trigger a wall to the north revealing several monsters and switches with red and blue torches in front of them. The color of the torches do not mean anything here, all you need to do is find the switch that is already lit. You must press this switch directly; this opens up the way to the secret exit in the northwest part of the map. Now to get the blue key, return to the plasma gun room. Go through the passage north of the torches and through here is a new area. Press the switch to lower the lift behind you. When you ride it up, you will notice the lower passageway zigzags and has nukage and crushers. To cross safely, jump from the platform you are on to the ledge on top of the switch and press the wall without green slime on it. This opens a secret with a radiation suit in it. Reuse the lift, and traverse this area carefully looking out for crushers until you obtain the blue skull key. With both of these things done you will be in the room with the chaingun, and the way west will be open. Take this path and the blue door to the secret exit.

* The vertex count without the effect of node building is 945.