E3M6: In The Deal is the sixth map of Army of Darkness TC. It appears as MAP06 in the PWAD's Doom II conversion. It was designed by Stefan Maes and uses the music track ? by Rick Sparks (Suture).

The design is a modification of standalone level Excalibur released separately by Stefan in 1994. v1.1 was uploaded to the idgames archive on April 11, 1995 to make Army of Darkness TC's entry the third revision of this level. 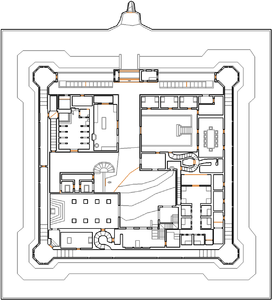 Map of In The Deal
Letters in italics refer to marked spots on the map. Sector numbers in boldface are secrets which count toward the end-of-level tally.

100% kills is not possible on this map as there is a floating torso (thing 485) that is too large to reach the teleporter and so cannot warp in to the main area.

* The vertex count without the effect of node building is 2071.

"This is the 3rd revision of my very first WAD I built, and which got me involved in this project. Previously released as Excalibur, AND elected as an All-Time Best DOOM Level on DoomGate, this version finally looks like I really wanted it to. The use of DOOM2 textures made quite a difference."
― Stefan Maes[1]