E3M6: Mt. Erebus is the sixth map of Inferno in Doom. It features a secret exit to E3M9: Warrens. It is named after Erebus, a region of the underworld in Greek literature. It was designed by Sandy Petersen and uses the music track "On the Hunt" and has a par time of 1:30.

All Atari Jaguar-based versions of Doom completely lack the map and exit to the secret level, Warrens. 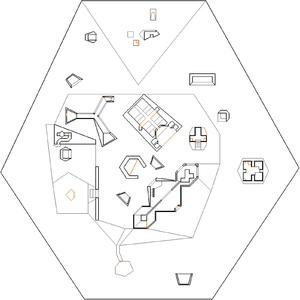 At the start of this level, go left, run over the lava quickly, reaching the land and going up the gray staircase. When you get to the top, jump off to the outcropping in front of you, where you can see a small platform with equipment surrounded by impaled or piled skulls. Kill the enemies here, and on this outcropping, collect the weapons, and the invulnerability powerup. Now face the small platform where you got the weapons, and run over the lava towards land to the right, onto the main landmass.

Proceed quickly to the wall with skull heads on it. From the wall, continue left, then right, and jump into the large triangular pit with water in it. Hurry towards the teleporter in the small alcove in the structure in the middle of the pit. After you teleport, open the door in front of you. You may pick up the blue skull key on easy skill levels, but it is not needed for these instructions.

From the door, open the wall to the left that has a tiny candle in front of it, marking a secret door. Take the teleporter in the secret alcove. Now turn around, and when you do, go carefully towards the right onto a smaller ledge. Facing the wall on the larger ledge, switch to your automap and make sure you (the arrow) has its back to the hollow, box-shaped structure in the water below. Note that you must still be invulnerable at this point, or you will likely die.

Then take out the rocket launcher, and fire your weapon towards the wall. The blast alone should carry you all the way to the box. This can also be achieved by simply running into the box. Jump in if you did not fall into its interior section already. Inside the box is a teleport which will take you to a previously locked out section of the map.

This section is sort of shaped like a 'Y'. In one of the far ends you will find the blue key, and in the other a switch to open the exit for you. Once outside the Y-shaped structure, immediately turn left and trace alongside the narrow ledge. To your right in the lava there should be a biosuit visible. Take it and proceed alongside the narrow ledge until you reach a brick wall. On the far side of this brick wall will be a small opening revealing a small passage. At the end of this passage lies the blue door which guards the normal exit of this map.

Secret exit: The area that contains the secret exit switch is inescapable, so only enter it once you are ready to exit the level. Pick up one of the invulnerability spheres and make your way back through the teleporter from secret #2. This time, inch along the platform you arrive on to your right and around a corner. You'll see a blue box in the water below. Position yourself directly across from this box and face the red brick wall. Fire your rocket launcher at the wall and run backwards simultaneously, and you should be fired into the box, the invulnerability powerup absorbing all damage you would have taken. (sector 88) This takes you to the secret level, E3M9: Warrens. It's possible to straferun into the box, but the rocket jump is the intended (and easiest) method.

There is a glitch where you can actually access the Warrens level without accomplishing the above. To do so, go to the area where you would normally try to get into the hole. On the outer regions and where the actual switch is (you won't see it as a blue wall is blocking it), press spacebar at the right spot. Though this is technically illogical, the game will think you've pressed the switch. However, you won't be credited for the secret once you finish the level. You won't be credited for that secret if you exit directly to the next normal level either (unless no-clipping mode was activated).

There are 9 uncategorized anomalies in this level's REJECT table.