E3M6: The Judas Cross is the sixth map of Curse of D'Sparil. It was designed by Kristian Käll (Kristus) and uses the music track from Heretic's E1M8: Hell's Maw. 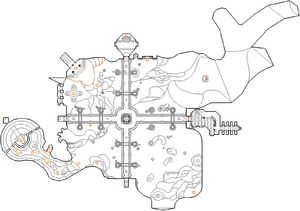 Map of The Judas Cross
Letters in italics refer to marked spots on the map. Sector numbers in boldface are secrets which count toward the end-of-level tally.

Take the items around you, including a Silver Shield and an Ethereal Crossbow, then head to the center of the cross and destroy any iron liches here. Go to the north point of the cross to collect a Dragon Claw and two Energy Orbs, then look left to see that part of the wall is damaged - step through the gap to a stone pillar, then carefully step south-west to drop to a platform below. Depending on skill level you may find sabreclaws, nitrogolems or undead warriors blocking the way - you may want to slay them before jumping down.

Head west up the steps until you reach a teleporter. Kill any monsters that emerge from it then step into the teleporter to be sent to a nearby ledge. Take the yellow key on your right then go south into a second teleporter to return to the start point.

Turn round and go through the stone door behind you (requiring the yellow key) to find another teleporter, which will send you to a rocky area south-east of the cross. Head north-west down the steps to a switch protected by weredragons and sabreclaws but prepare yourself before pressing it - pressing the switch opens a door at the south point of the cross, but also causes disciples of D'Sparil (plus some fire gargoyles on easy skill levels) to teleport in to the east and south. Climb back up the rocks to the teleporter you arrived on, which will send you to the south point of the cross.

Take the Gauntlets of the Necromancer here if needed then head south through the door you just opened, taking an Enchanted Shield and stepping into another teleporter which leads to the rocks north-east of the cross. Head south down the rocks until you reach lava, then step across to find the green key on a step between two volcanoes.

Head north back up the rocks to the teleporter you arrived on, which will return you to the start point. Go to the north point of the cross again and go through the stone door to face one or two iron liches. After destroying them, take the Silver Shield that appears here on easy and medium skill levels then step into the teleporter at the top of the steps to be sent to the area south-west of the cross. Head south over the lava stream, then drop to the lava below and head south-west until you reach a platform with a crystal vial.

Look north-west and kill any approaching fire gargoyles, plus weredragons on medium and hard skill levels, then follow the tunnel until you reach a platform with another Silver Shield (some of the small platforms will fall away when stepped on). Go through either of the doorways to the left and right to enter a curved room with a number of sabreclaws and disciples; after dispatching these monsters, climb up the gray steps at the south side of the room and press use on the plinth holding the blue key to lower it. Step into the teleporter that is revealed behind you to return to the start point.

Go to the east point of the cross and take the Hellstaff, Greater Runes and Chaos Device then open the stone door to confront a maulotaur, joined by two iron liches on hard skill levels. Defeat these monsters then head up the yellow steps and follow the path round to a teleporter. Open the stone doors between the yellow and green key gizmos to reveal a switch; prepare your weapons and artifacts before pressing it, as several alcoves containing sabreclaws will open behind you. To avoid being trapped, run west before firing any weapons so that the sabreclaws will not be alerted until you have passed them.

In the area north-west of the cross, an Enchanted Shield can be found at the bottom of some narrow steps.

After arriving in the area containing the green key, head east and follow the root-covered ledge to find a Phoenix Rod.

In the lava-filled tunnel leading to the blue key, there is a platform against the south wall that holds four crystal vials, or two on hard skill levels. The wall opposite this platform can be opened using the yellow key to reveal a teleporter, which will send you to a ledge with a Tome of Power and a Mystic Urn.

* The vertex count without the effect of node building is 5574.