E3M6 is the sixth map of the third episode of Heroes. It was originally designed by Jin H. Kim (Time Traveler) as CRATER.WAD (Docking Crater Alpha), then slightly modified by Albert Dewey for the compilation. It uses the music track " ". 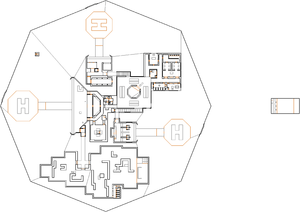 Map of E3M6
Letters in italics refer to marked spots on the map. Sector numbers in boldface are secrets which count toward the end-of-level tally.

Secret exit: There is a red door to the north of the area with the yellow key. The first time you enter the room, you will teleport, but the second time you enter, you can press the exit switch.