E3M7: Altar of Pain is the seventh map in the Shadowlands episode of Masters of Chaos. It was designed by Caleb26 and uses the music track from Heretic's E3M2: The Cesspool. 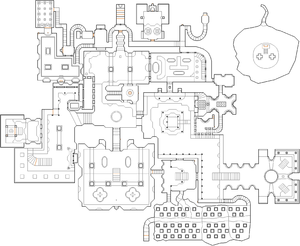 Map of Altar of Pain
Letters in italics refer to marked spots on the map. Sector, thing, and linedef numbers in boldface are secrets which count toward the end-of-level tally.

Climb the steps in front of you and take the Ethereal Crossbow at the top, then turn round and go back down the steps to see that bars have lowered ahead. Kill the sabreclaws in the tunnel behind the bars (if you have not fired a weapon then they will not notice you immediately), then go into the tunnel and press the switch in the right-hand wall. This will open the next set of bars, allowing you to enter an outdoor area with a round stone structure with a tree.

Turn left at the tree and climb the steps ahead, then turn left again to head past the large stone arch. After passing the arch, look right to see another set of steps and climb them to the top (a door will open behind you and release green chaos serpents during the climb). Turn right at the top of the stairs and follow the walkway round the corner, then go through any of the archways on your left. Pass the golems and sabreclaws here and climb the steps - a pillar in front of you will lower, letting you take the Wand of Embers and two Ember Rubies sitting on it.

After taking the weapon, look at the two pillars in front of you - the pillar on your left has a switch hidden in its north face. Press it and return to the walkway, watching out for gargoyles and fire gargoyles that are teleporting in. Head north along the walkway until you reach a lift which will carry you to a higher floor, then keep following the path and go through the open door at the end. Take the Silver Shield then go east into a small passage. Destroy the sabreclaws here and take the green key behind them.

Leave the room and drop down to ground level, watching out for the golems and gargoyles that have been released just outside. Return to the round structure and head north to an area with two large square columns, then climb the staircase to the north and go through the door at the top. Destroy the waiting sabreclaws then turn right and climb the stairs to one or two nitrogolems. Turn left here and go through the door in the left-hand wall, which is flanked by green key gizmos. Eliminate the enemies in the next area, including a shadow beast, and press the switch behind it. This will open the walls on either side and reveal a second switch.

Pressing the second switch will raise a pillar near the staircase you climbed earlier; you will need it later in the level. Kill the monsters that have been revealed, then return to the door at the top of that staircase and climb up the west staircase this time, which leads to a room with two wooden doors. Go through the north door and climb the curved staircase in the chamber behind it. Slay the ophidians waiting at the top and go north-west up another passage, which leads to a room with decorative pillars on blue plinths. Defeat the butchers in this room, then take the Dragon Claw at the south end of the room and press the nearby switch.

Backtrack to the room with two doors, watching out for sabreclaws and undead warriors on the way. Go through the south door this time and follow the staircase up to a room with a red floor. Defeat any chaos serpents waiting here then go to the north-west corner of the room to find a switch. Pressing it reveals three alcoves at the south end of the room, two of which contain disciples of D'Sparil. Fight or avoid them, then climb the steps to the middle alcove and step into the teleporter here.

You will arrive on a stone ledge in the outdoor area. Head forward to the wall ahead, then start jumping east across the platforms (this is where you need the pillar you raised earlier). When you reach a wall opening blocked by braziers, make two more jumps south to the next walkway and then follow it until you reach a small archway leading to a new area (on the way you will see a passage on your left leading to an unreachable ledge, which you will need to return to later). Watch out for attacks from the surrounding enemies, including two shadow beasts on a wooden platform, and continue following the walkway east until you reach an area with grated ceilings.

Grab the Shadowsphere by the window, then head east past a stone pillar then climb the staircase in the south wall. Kill the knight archers waiting at the top then press the switch in the south-east corner. You now need to backtrack along the walkway you just used until you arrive at the passage with the unreachable ledge, where stairs have now risen. Climb the stairs and slay any ophidians guarding the area, then press the switch in the east wall and step into the teleporter that lowers behind you.

You will arrive on a staircase, facing a set of bars that have just lowered. Go through these bars to an enclosed area then press the switch in the north-east corner, which will raise another set of steps for you to climb. Dispatch the archers here then turn left and head down a set of steps leading to an area with lots of square columns. Follow the river here east, watching out for weredragons waiting to ambush you, until you reach a waterfall then head north up a curving staircase.

At the top of the stairs, head forward and press the switch being guarded by nitrogolems, then drop off the ledge to the water below. Climb up the staircase in front of you to reach an area with a large round column - a Bormereth will be waiting here if you have not killed it previously. Look round the column to find the blue key waiting to be collected.

Taking the blue key will cause an iron lich and four chaos serpents to teleport in nearby. Eliminate them then return to the staircase but do not go down it - instead, head north along the walkway to go back to the room with grated ceilings, then head north-west along another walkway to a wide archway with a pillar. Go through this archway and turn right, heading forward to a ceilinged area past another set of archways.

Follow the walkway here north past several enemies until you reach a switch being guarded by a butcher; press it to lower the wall on your right, defeat the ophidians waiting behind it and press another switch between blue key gizmos. Go down the staircase that is revealed on your right to a teleporter being guarded by two undead warrior ghosts. Step into the teleporter to be sent to a fenced area with sabreclaws - destroy them then approach the platform with the exit teleporter and press the switch hidden on its west side. This will raise a set of stairs and allow you to finish the level.

There is a Tome of Power on a ledge just north of the round structure with the tree. You can reach it by dropping down from the walkway above.

A Phoenix Rod can be found on the wooden platform in the water-filled area on the east side of the level. You can reach the platform from the stone walkway running round the edge of the water.

* The vertex count without the effect of node building is 4960.

This level contains the following numbers of things per skill level, not including chaos serpents or Discs of Repulsion which are spawned via scripts: