E3M7: Inner Sanctum is the seventh map of Inferno in Doom the Way id Did. It was designed by Jacob Zuchowski (ellmo) in the style of Sandy Petersen. The par time defined in the DEHACKED lump is 1:45. 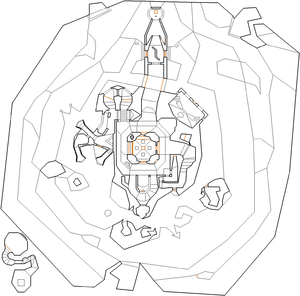 Map of Inner Sanctum
Letters in italics refer to marked spots on the map. Sector, thing, and linedef numbers in boldface are secrets which count toward the end-of-level tally.

You will start in the southern part of a caged central interior. The other parts have a red skull key, a blue skull key, and a BFG9000. From the start head straight south to the switch here to open the door leading to the underground cavern. The cavern is vast with a number of enemies dotted around it, so be careful of where you are at. You will find blue doors to the north; they lead to the exit. Go to the western part of the cavern and you will find an opening inwards. Go here and hit the switch to open the door you see through the window. Get out of there, and head around the red rocks till you reach this door. Follow the linear path and you will eventually acquire the red skull key from the center. When you do, notice that the place around you shapeshifts, and you are able to head back to the beginning through a new tunnel. Do so, and head back into the cavern. Now find the red door, it should be in the southeast part of the cavern. Take this door to go into the sanctum again. Head left, up the stairs to a switch, and then after pressing it take the other route and you should find the blue skull key. Again, the sanctum will shapeshift, and a baron of Hell will teleport in. You may find an extra switch here, which lowers the central teleporter. With the blue key, head to the northern part of the cavern where the exit is. Behind the door, the exit is just to the north.

There is a berserk pack on the platform to the northwest.

The room on the northeastern part of the rocky interior can be opened via the eye switch. Enter it to find a megaarmor.

If you enter the teleporter from the northern side, (accessible once you collect the BFG9000 in Secret #4) you will find a winding passage that dead-ends in a room with an artistic rendering of a Dopefish on the wall.

* The vertex count without the effect of node building is 1079.