E3M7: Netherworld Citadel is the seventh map of the Woe episode of No End In Sight. It was designed by Emil Brundage (NaturalTvventy). 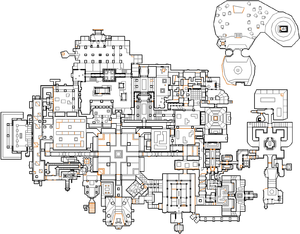 Map of Netherworld Citadel
Letters in italics refer to marked spots on the map. Sector numbers in boldface are secrets which count toward the end-of-level tally.

From the start, out the window a switch on the right raises a bridge on the left. After activating the switch (necessary to return to the start area to collect secret #1), jump into the pit, collect the rockets and take the teleporter. Deal with the lost souls, then take the stairs on the right. At the end of the stairs, activate the switch to invert the stairway and collect the blue skull key. Jump out (mindful of the crushing ceilings) and continue down the hallway to trigger a baron-of-Hell ambush, though the crushers will do most of the work.

Fight your way back toward the start and collect the yellow skull key. Atop the wall, use it to access the ledge across from its original location. Activating the switch will unleash a swarm of imps. Past them, the left passage leads to the exit while stairs on the right access the more-difficult-to-reach areas of the level. At this point you can skip the rest of the level and proceed directly to the exit (see 'exit' below).

Up the right stairway is a hallway with damaging slime. At the end of the hall, several platforms and cages of imps await. Remain on the platforms (falling off will make half the level inaccessible) until a wall opens and you can jump to a slime ledge and fall down on the other side.

Deal with the cacodemons, then press the demon switch to open another slime hallway. Go straight (detouring around the central pillar) and ride the lift up to reach another imps-on-platforms room. For added fun, these platforms sink when you step on them, and failing to make it all the way across will once again make several parts of the level inaccessible. You can pick off most of the imps before starting your run to make it easier to get across. On the other side, jump down into a cacodemon ambush.

Activate the demon switch to open yet another slime hallway. Go straight again (detouring around the central pillar) and you'll find the throne room. Collecting the supercharge initiates a teleport-ambush. Open the blue skull door and trigger the lift (to easily return to this area later); a switch behind the throne opens a doorway opposite. After passing through a small dining room, a miniature Icon of Sin awaits. A rocket to its brain will raise a path in the next room to a teleporter (thanks to a hidden barrel-stalled lift, similar to e1m5).

Take the teleporter. Note: this area can only be accessed once. Collect the cells, then approach the door to fall into a new area. Several secrets are hidden in this area (details below), along with a fake exit, computer area map, and blue armor. Near the fake exit, a secret contains a teleporter to leave this area.

The "secret" teleporter leads to another new area, the graveyard. Note: this area can only be accessed once. A "secret" cell pack and supercharge await on pillars. Exploring the area will trigger a large baron of Hell ambush. The red skull key awaits inside the mausoleum, along with a teleport line back to the Icon of Sin area of the level proper.

Jumping down the hole near the Icon of Sin will reconfigure the central pillar area and release a cyberdemon, baron of Hell, and imp ambush. This fight is entirely optional; you can avoid it by returning to the blue skull door in the throne room. Either way, the nearby red skull door will teleport you to the exit with several powerups for the final ambush, which you can trigger now before exploring the eastern areas of the level if you like (see 'exit' below).

A series of steps lead up to the slime walkway surrounding the exit area. A radsuit on the right (accessible if you triggered the elevator behind the blue skull door) will allow you more time to fight through the enemies. To the north, beyond a slime hallway and room, a small dark maze leads to another blue skull door. The area beyond provides access to a secret supercharge in the library to the south. South of the library, a "dining hall" appears to trap the player, but there are two secret exits, one leading to restrooms to the east and a teleporter back to the yellow key area, the other leading south to a trap room.

Inside the trap room, attempting to collect the pile of keys will cause barriers to appear, stranding the player in slime. Following the slime path releases an ambush; imps and cacodemons on the left, demons and barons on the right. On both sides a skull switch opens a passage to a long hallway with a berserk pack, a lift, and a switch that converts the slime walkway around the exit to stone. The switch in the left ambush also opens a passage to the exit area, the only escape from the trap room.

A 'C' shaped cage contains several cacodemons. Fighting them from the surrounding slime walkway will be somewhat painful (though, if you pressed the southeastern switch the walkway will be stone instead). Inside their cage, a blue door grants access to a blue armor and triggers the final ambush. Cacodemons and imps will appear on the surrounding walkway; the bars and low light levels make it difficult to target the enemies, especially while dodging fire from three directions. Eventually, bars in the center of the 'C' will lower, allowing the player to run across a catwalk to the exit. Several belated radsuits near the exit can be used to collect powerups or explore any remaining areas of the map.

* The vertex count without the effect of node building is 8388.