E3M7: The Chasm is the seventh level in The Dome of D'Sparil episode of Heretic. 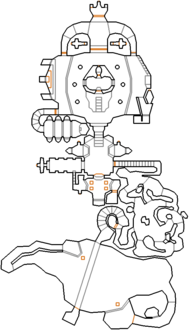