E3M7: The Icicle is the seventh map of Curse of D'Sparil. It was designed by Kristian Käll (Kristus) and uses the music track from Heretic's E1M6: The Cathedral. 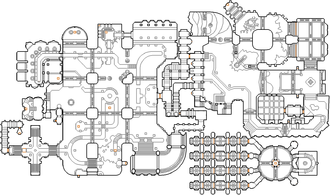 Map of The Icicle
Letters in italics refer to marked spots on the map. Sector numbers in boldface are secrets which count toward the end-of-level tally.

Take the Ethereal Crossbow in front of you and head east along the icy passage (the ice is slippery so watch your movements). Alcoves containing undead warriors and disciples of D'Sparil will open to the left and right as you proceed, but ignore them for now and head through the stone door to the east - the solid ground here will make it easier to dodge the monsters' attacks, and you will avoid being surrounded. Head north-east into a round hall and take the Dragon Claw under the east archway, then look north-east and south-east to see two chambers containing iron liches guarding switches.

After defeating the liches and pressing both switches, return to the round hall and head east up a set of steps. The blue key can be found at the top of the steps, next to an Energy Orb.

Return to the round hall and go through any of the blue doors in the middle of the hall. Step into the teleporter behind the doors to find yourself facing one or two iron liches - use the Mystic Urn and Hellstaff in front of you to destroy them. Head down the steps to an icy area where a number of sabreclaws are waiting, then step on to a stone platform to collect the Gauntlets of the Necromancer. From here, head south until you reach a pool of water then walk over the waterfall to drop to the ice below.

Head north-west and look for a staircase on your left, which leads up to a light-blue ledge guarded by a number of undead warriors. Follow the path south-east and look for a staircase on your right leading to the next floor which has more undead warriors guarding a Morph Ovum. Head north-west to a third staircase and kill the disciples at the top, then follow the passage round the corner and down some steps with one or more undead warriors. At the bottom of the steps, open the door on your left and kill the disciple waiting behind it then go through and slay three nitrogolems waiting at the bottom of the yellow steps. Follow the path past two more nitrogolems until you reach an area with a light-blue floor.

As soon as you reach this area, turn right to see a light-blue platform ahead and run across to it. Head west and run across two more gaps, then follow the platform west down a curved staircase to a teleporter. Go through it then step forward to collect the yellow key, which will be guarded by undead warriors on hard skill levels.

Head north until you reach the wall then turn left to see a stone door. Open the door, killing an undead warrior ghost waiting behind it on medium skill level or two on hard, then go through and turn right to confront one or more disciples. Go to the area that the disciples came from to find two ophidians guarding a switch; prepare your weapons before pressing the switch, as a wall to the south will lower and reveal a number of sabreclaws. Once they are destroyed, go through the wall that lowered and turn right to confront some ophidians and undead warriors. Take the Chaos Device next to the ophidians then head west to drop off the ledge where three disciples are waiting.

After killing the disciples, kill any waiting monsters to the south then open a door between two yellow key gizmos. Destroy the iron lich behind the door then step through to an outdoor area with many light-blue platforms that are occupied by numerous monsters. Run across to the platform to the west, then run north to a second platform and head down the staircase on your left (an iron lich is waiting at the bottom on hard skill levels). Follow the path west until you enter a metal structure guarded by undead warriors, along with nitrogolem ghosts on medium and an iron lich on hard. Head round the corner to find a switch at the end of the path; ready yourself before pressing it, as the switch will lower the surrounding walls to release a crowd of monsters. It may be easier to go back outside, as the doorway creates a bottleneck for the monsters.

Once the way is clear, go back to the switch and head east to a teleporter which will send you to a platform with three ophidians. Follow the platform east and north, running over a gap to land on a curved staircase with a Tome of Power, then follow this platform west until you jump over a gap to a larger platform (nitrogolems guard this platform on medium, joined by an iron lich on hard). Follow the path west and south until you enter a building with a green floor. Defeat the monsters, including one or two iron liches, then climb the steps and press the switch at the top. You now need to backtrack to the platform north-west of the yellow key door, watching out for disciples teleporting in just outside the green room.

After reaching the indicated platform, follow it east around a curve and cross to a ledge guarded by ophidians, joined by sabreclaws on medium and an iron lich on hard - use the Shadowsphere by the south edge to help you. Head west through a short tunnel and over a bridge, where a teleporter is guarded by several undead warriors. Step into the teleporter then turn left to kill any undead warriors guarding the area. Go through the tunnel in front of you and take the green key sitting between two gizmos.

After getting the green key, it is possible to run north off the ledge to land on a platform below. From here, head west to a cross-shaped area with green key gizmos and defeat one or two waiting iron liches, along with several undead warriors. Continue heading west to a door requiring the green key which is guarded by two ophidians, then open the door to confront another iron lich. Step through and head down the stairs, clearing out any nitrogolems blocking the path until you reach the exit door. Open it and slay one or two disciples, then step into the gray teleporter to finish the level.

If you miss the platform and land on the ice, head east to find a set of gray steps leading up to a light-blue area you visited earlier in the level (you may need to contend with a number of sabreclaws on the way). From here, return to the yellow key door and follow the directions above as if you were heading for the green room. When you reach the circular staircase, go down the steps to the west then follow the path here to the cross-shaped area.

A Tome of Power can be found on a ledge south of the platform holding the yellow key. South-east of this platform are two staircases going west and south - take the south staircase and follow it past a number of ophidians to reach the item.

Before climbing the staircase to the Tome of Power mentioned above, head east to find a pathway guarded by undead warriors and sabreclaws. If you follow this pathway you will eventually reach an area with a yellow floor that holds an Enchanted Shield on easy and medium skill levels, or a Silver Shield on hard. From here, head north into a hall that contains a Phoenix Rod and a Mystic Urn.

* The vertex count without the effect of node building is 10791.