E3M8: Church of the Poisened Minds [sic] is the eighth and final level of Serenity. It was designed by Bjorn Hermans and Holger Nathrath, and includes a custom music track. 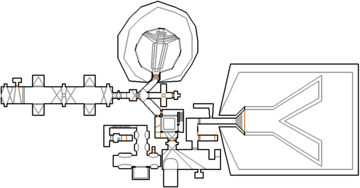 Map of Church of the Poisened Minds
Letters in italics refer to marked spots on the map. Sector numbers in boldface are secrets which count toward the end-of-level tally.

Northeast of the level is giant, grey, and empty room, which is unreachable unless you are using the noclip cheat. The intended purpose of this room is unknown.

On hard skill, one baron of Hell (thing 196) is placed in the void outside the level, and thus cannot be killed. As a result, only 98% Kills is possible.

Because one secret cannot be obtained without the noclip cheat, you can only get 88% Secrets in this level.