E3M8: Core is the final map of Inferno in Doom the Way id Did. It was designed by Eli Cohen (ProcessingControl) and resembles a Sandy Petersen boss map in which the player is pitted against the spider mastermind. The par time defined in the DEHACKED lump is 1:15. 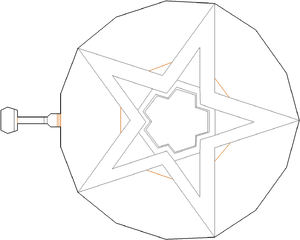 Map of Core
Letters in italics refer to marked spots on the map. Sector, thing, and linedef numbers in boldface are secrets which count toward the end-of-level tally.

Go through the tunnel picking up the plasma gun, the rocket launcher, and the ammo. When you go out into the open, you will teleport into the arena. There are eight barons of Hell here, along with the spider mastermind in the middle, whose platform goes up and down. In addition, the outer reaches of the arena are all under a crusher, so if you need anything on the perimeters there, look out for the ceiling. You only need to kill the spider mastermind to finish the level.

* The vertex count without the effect of node building is 104.