E3M8: D'Sparil's Keep is the eighth level in The Dome of D'Sparil episode of Heretic. It features a boss battle with D'Sparil. 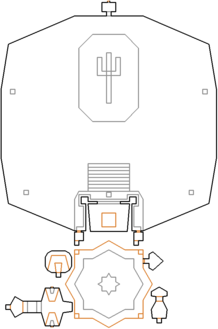 Map of D'Sparil's Keep
Letters in italics refer to marked spots on the map. Sector numbers in boldface are secrets which count toward the end-of-level tally.

You start in a water area with various gargoyles around you. In the corners of the pool, there is an Ethereal Crossbow, some Ethereal Arrows, a Shadowsphere, the Wings of Wrath and a Silver Shield. Collect them if it is necessary and fly to the higher area. Enter the opened portal. You will land in a small room with a pair of disciples. Blast them and pick up the Dragon Claw, the Energy Orb, two Crystal Vials and any items the disciples may drop. Now, go back through the portal.

Enter the newly opened one in the main room, but make sure to activate your Shadowsphere before doing it. You will land in a room filled with nitrogolems. Among them there are the Gauntlets of the Necromancer, Ethereal Arrows and a Claw Orb. Use either the Dragon Claw or the Gauntlets to get rid of the monsters. Then go back to the main room and enter the third portal.

Three ophidians will greet you. Destroy them, grab the pair of Lesser Runes and activate both switches. An iron lich will be your new obstacle. Behind him, there are Crystal Vials, Greater Runes, the Hellstaff and a portal. It is recommendable that you activate your Tome of Power and blast the lich with the powered Crossbow. It should finish him before he has time to deal any significant damage. Enter the portal to return to the main room and step on the last portal.

You will land on a trident-shaped ledge with a Tome of Power, an Enchanted Shield and a Phoenix Rod. You will notice D'Sparil and his green chaos serpent below you poised to attack.

First off, run all around the large arena, collecting everything you can, including the Wings of Wrath. Fly to the southern ledge where there are plenty of Mace Spheres and hanging corpses. D'Sparil should rarely if ever attack you until you start fighting him in earnest. Now, pay attention to D'Sparil. Use the Phoenix Rod from a distance and you should be safe, but be aware that the weaker the serpent gets, the more fireballs he will fire and the quicker he will run (by the point in the game, you should have no trouble circle strafing).

When the chaos serpent dies, D'Sparil will rise. His only attack is a fast lightning bolt that deals massive damage but gives you plenty of time to react. The real challenge, anyhow, comes from his teleporting and summoning of disciples; you should eliminate him as quickly as possible since the disciples may distract or kill you. The Hellstaff might be a good option for the fight, but consider the Phoenix Rod as well - D'Sparil teleports away rather often so slower projectiles from too far away and continuous attacks will not work so well. If the disciples he summons get out of hand, consider using a Tome of Power with the Dragon Claw to clear them out.

Once D'Sparil is dead, a passage with a switch will open at the far end of the arena. When you press the switch, stairs will rise to the exit portal. Congratulations, enjoy the ending.